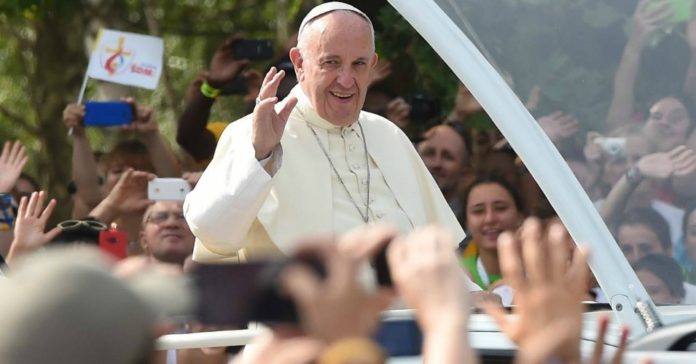 Pope Francis surprised reporters on a flight from Krakow to the Vatican late Sunday when he blamed the “god of money” for extremist violence in Europe and the Middle East, saying that a ruthless global economy leads disenfranchised people to violence.

“Terrorism grows when there is no other option, and as long as the world economy has at its center the god of money and not the person,” the pope told reporters, according to the Wall Street Journal. “This is fundamental terrorism, against all humanity.”

The pope was responding to a journalist’s question about whether there is a link between Islam and terrorism, particularly focusing on the fatal attack on a priest by Muslim extremists in France last week.

“I ask myself how many young people that we Europeans have left devoid of ideals, who do not have work. Then they turn to drugs and alcohol or enlist in [the Islamic State, or ISIS],” he said, Reuters reports.

The pope said that no religion has a monopoly on violence, the Wall Street Journal notes:

His own experience in interreligious dialogue had shown him that Muslims seek “peace and encounter,” he said. “It is not right and it is not just to say that Islam is terroristic.” And he said no religion had a monopoly on violent members.

“If I speak of Islamic violence, I should speak of Catholic violence. Not all Muslims are violent, not all Catholics are violent,” Pope Francis said, dismissing Islamic State as a “small fundamentalist group” not representative of Islam as a whole.

“In almost all religions there is always a small group of fundamentalists,” even in the Catholic Church, the pope said, though not necessarily physically violent. “One can kill with the tongue as well as the knife.”

The remarks followed similar comments made last Wednesday, when Pope Francis argued that the current Middle East conflicts are wars over economic and political interests—not religion or so-called “Islamic terrorism.”

“There is war for money,” he said on Wednesday, according to the Wall Street Journal. “There is war for natural resources. There is war for the domination of peoples. Some might think I am speaking of religious war. No. All religions want peace; it is other people who want war.”