Home Uncategorized Meet The Black Man Who Made Hundreds Of Racists Quit The KKK... 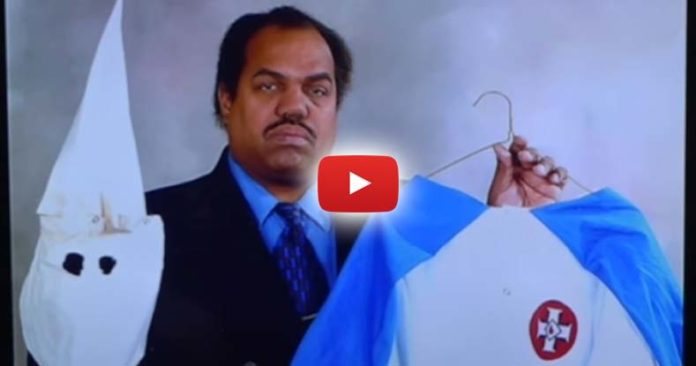 58-year-old blues musician and author Daryl Davis has taken an unusual approach to racism, and has managed to successfully convince hundreds of racists to quit the KKK. Davis goes far behind enemy lines to Klan rallies and meetings of white supremacists to make friends with people who hate him for no reason and he’s been doing it for over 30 years. He is even responsible for single-handedly causing an entire chapter of the KKK to dissolve in the state of Maryland.

Years ago, Davis began seeking out members of the KKK so he could learn more about racism first hand, straight from the horse’s mouth. He never actually sought out to convert any KKK member or change their mind. In the beginning, his initial goal was just to try to gain some type of understanding for why these people believe what they did.

Davis is not a total pacifist, though, and is prepared to defend himself at any time. On at least two separate occasions he was attacked by Klan members and had to beat them up for his own protection, but he does not go anywhere looking for a fight.

‘There have been some incidents in which I was threatened and a couple of instances where I had to physically fight. Fortunately, I won in both instances,” Davis said.

‘These things happen from time to time, but it is to be expected because you are dealing with someone who hates you and wants to be violent just because of the color of your skin. Some of them are absolutely repulsed when they see a black person and want to hurt that person. At the core of it, although they won’t at first admit it, they express superiority, but truly feel inferiority and in order to elevate themselves, they have to push someone else down,” he added.

Most often, though, these meetings happen without any incident, and while there are plenty of tense moments, the interactions between Davis and the racists that he encounters are surprisingly pleasant. Instead of focusing heavily on race and areas of disagreement, Davis instead tries to focus on areas of agreement and steers the conversation in a direction where both sides have common ground.

Most often, though, these meetings happen without any incident, and while there are plenty of tense moments, the interactions between Davis and the racists that he encounters are surprisingly pleasant. Instead of focusing heavily on race and areas of disagreement, Davis instead tries to focus on areas of agreement and steers the conversation in a direction where both sides have common ground.

Humor, friendliness, and music help Davis break the ice with those that he encounters.

Daryl explained one encounter where music helped him connect with a racist, saying that “Music absolutely played a massive role in bridging many gaps in the racial divides I would encounter. Once when I was performing in a predominantly white venue, a white man approached me on my break and put his arm around me and exclaimed, “This is the first time I’ve ever heard a black man play piano like Jerry Lee Lewis.”

“I quickly enlightened him as to the origin of Jerry Lee’s music and told him that Jerry Lee had learned that style from black Boogie Woogie and blues piano players. The man did not believe me, despite the fact that I further told him that Jerry Lee was a good friend of mine and he had told me himself where he learned that style. But, the gentleman was fascinated with the idea that a black man could play like that. He was curious and wanted to learn more about me. It was then revealed to me by him that he was a member of the Ku Klux Klan. Over time, he and I became good friends. He ended up leaving the KKK,“ he added.

Davis has a closet filled with Klansman uniforms, all of them given to him by friends and former Klansman who quit the racist cult as a result of their friendship. One KKK member and Baltimore City Police officer even gave Davis both his Klansman uniform and his police officer’s uniform.

“I was very well prepared for the meeting in terms of knowledge of my topic. I have just about every book written on the Klan and I’ve read them all. In fact, I know more about the KKK than most Klan members know about their own organization. Knowledge, information, wit, and the way you disseminate these attributes can often prove to be a more disarming weapon against an enemy or some with whom your ideology is in conflict, than violence or lethal weapons,” Davis said.

Davis does not push strongly for people to renounce their ways, and he does not lecture them about the ills of bigotry, instead, he simply shows up to learn and make friends.

“It’s a wonderful thing when you see a light bulb pop on in their heads or they call you and tell you they are quitting. I never set out to convert anyone in the Klan. I just set out to get an answer to my question: “How can you hate me when you don’t even know me?” he asks.

“I simply gave them a chance to get to know me and treat them the way I want to be treated. They come to their own conclusion that this ideology is no longer for them. I am often the impetus for coming to that conclusion and I’m very happy that some positivity has come out of my meetings and friendships with them,” Davis said.

Surprisingly, Davis gets a fair amount of criticism from people of his own race, for mingling with the enemy.

“There was surprise and shock on both sides (black and white), mostly from people who don’t know me, or who haven’t bothered to research me, read up on me, or hear my interviews or lectures. Not all, but most of the criticism has come from black people. I have been called a ‘sellout’, ‘Uncle Tom’, ‘Oreo’ and a number of other terrible names,” Davis explains.

“Unfortunately, I must compare these particular black people with the KKK and other white supremacist groups, with no distinction, other than the color of their skin. This is because they are engaging in the exact same hateful behavior as they accuse the white racists. I can explain it like this because I’ve seen it on both sides,” he says.

In a recent Interview, Davis discussed the coming Trump presidency and said that despite the racial tension in the media, he believes that race relations are better than ever.

“In Israel, it’s Palestinian versus. Jew. In Lebanon, it’s Christian versus. Muslim. In Iraq, it’s Sunni Muslim versus Shiite Muslim. In certain African countries, the conflict is tribal. In India, we see a caste system based on the shade of skin color and classicism,” he explains.

“There has always been a great deal of racism in the U.S. before and after Obama. However, racism in the US is down, post-Obama.What you are seeing is those people who were dormant racists, being given a new lease on life by the sentiments of our new President-Elect. They celebrate his election. But, let me be clear here. Every racist I know, and I know a lot of them, voted for Trump. However, that does not mean that everyone who voted for Trump is a racist. I know a lot of people who voted for him who are not racist,” he added.

One thing that is worth mentioning in relation to racism and the popularity of Trump, is the fact that being hyper-vigilant about shaming any instance of real or perceived racism, seems to actually embolden racists, and even push moderates towards adopting racist views. This is a dynamic that many credit for Trumps rise in popularity. Davis takes a contrasting approach that seems to have more of a positive and lasting effect.

How 1 of America’s Deadliest Police Forces Gets Away With Shooting and Killing Black...

Shocking U.S. Death Chart Reveals Root Cause Of Most Mortality Comes From Prescriptions And...