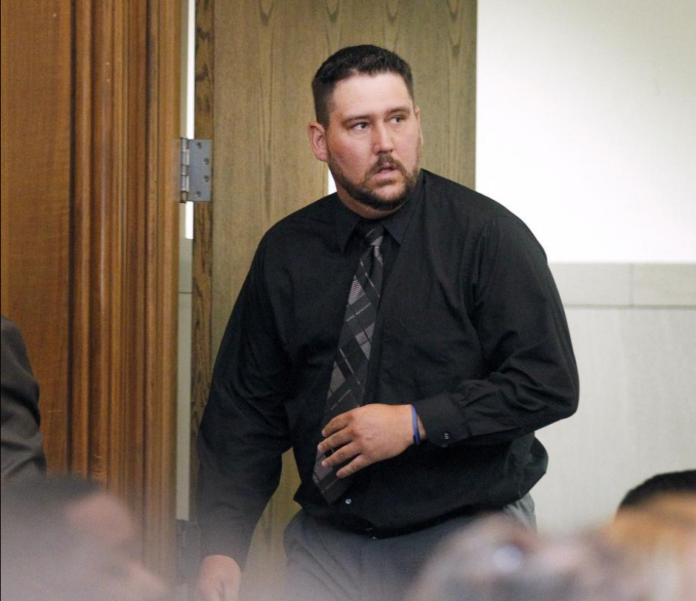 Between February 2010 and February 2012, a small group of Milwaukee officers took part in a string of serial assaults on subjects pulled off the streets.  In many cases, the officers demanded the subjects produce the drugs they assumed were being hidden somewhere on their person.  When they were not satisfied with the cooperation from the subjects, an officer would jam his hand into the subject’s underpants, touch his genitals, and insert a finger into his anus on the side of the road.  Some of the complaints stated that drugs were planted during these searches.  At least one complainant was a juvenile, and one stated that he was fingered so hard that his anus bled afterwards.

The group’s ringleader was Milwaukee Officer Michael Vagnini, assisted primarily by three other officers; Jeffrey Dollhopf, Brian Kozelek and Jacob Knight.  Although 7 officers and one supervisor were originally suspended, the four officers mentioned above were the men the district attorney felt had enough involvement to pursue legal actions against.

Officer Vagnini was the the one who directly performed the searches with his hand; the others were present and assisted with detaining the victims, holding them down, provided Vagnini cover while molested them, and then failed to report the crimes to superiors in the department.

A Pattern of Abuse

For two years the complaints piled up from the victims, with the knowledge of department superiors, including Milwaukee Police Chief Ed Flynn.  The chief stated that the department had been aware of the behavior of his officers for “a couple of years,” but waited to investigate until the department recognized a pattern.  One complainant said he notified the department of Vagnini’s abusive tactics as early as 2008.

Vagnini and his cohorts were assigned to Milwaukee’s District 5, and regularly pulled over drivers on a pretense of not wearing a seatbelt or of having darkly tinted windows, followed by searches without a legal reason, according to prosecutors.

Finally, in October 2012, city officials felt charged the officers, and the public began to become aware of the stories.  One case was described by the Milwaukee Journal-Sentinel:

In one case, a man had gone to check on his aunt’s house in the 3500 block of N. 10th St. When he came outside, his vehicle was surrounded by squad cars. Vagnini put his bare hand down the man’s pants, touched his scrotum and inserted fingers into his anus, the complaint says. When the man pulled away, Vagnini put him in a choke hold that caused him to slobber onto Vagnini’s arm. Vagnini repeatedly told him to “stop resisting” as he pulled back so hard on his neck his feet almost left the ground, the man said. Two other officers held his arms and one put a gun to his head, the complaint says.

Vagnini claimed he found crack cocaine inside the man’s anus, but the man insisted it “was not on him prior to the search,” the complaint says.

Another complaint describes a man being fingered so forcefully that his anus bled.  From JSonline:

And the stories kept coming forward.

Robert Mann, 55, contends that Police Officer Michael Vagnini stopped him as he was walking near N. 31st St. and Atkinson Ave. in June 2011 and without probable cause, pulled down Mann’s pants and put his hand in Mann’s rectum “in an unsafe, unhygienic, and intentionally humiliating fashion.”  No drugs were recovered from Mann.

[A] juveinile, identified as K.F., was 15 when he was riding in a friend’s car that was stopped by police on N. 26th St. in December 2011.  According to the suit, he was ordered out of the car before Vagnini reached into the teen’s pants, touching his genitalia and his anus while Police Officer Jacob Knight watched.

The Milwaukee Journal Sentinel analyzed the cases of at least 13 victims as of August 2013.

Keon Canada was pulled over five times during the summer of 2011 and subjected to butt-cheek searches four times, and that officers opened the front of his pants another time. No drugs were found during any of the stops.

Someone identified only as M.C.claims he was stopped and illegally searched three times in 24 hours during the summer of 2011. No drugs were found.  In December 2011 and January 2012, M.C. contends he was again stopped by Vagnini and other officers and on both occasions was struck in the face by Vagnini before being pulled out of a car, held on the ground and subjected to a forceful penetration of his anus.

James Ashford claims he was subjected to six illegal searches over a six month period starting in the summer of 2011. At one point, he, his mother and other relatives met with a District Five lieutenant to complain that Ashford was being harassed.  According to the lawsuit, the lieutenant told Ashford he should stay out of certain neighborhoods, and never acknowledged that the officers’ actions, including the warrant-less, public rectal searches, were inappropriate, or that the officers would be investigated or disciplined.

After the long official silence, Police Chief Ed Flynn made public condemnations of the charged officers.  “Quite frankly, I’m disgusted by the willful actions by some of the officers in our Police Department.  And I’m appalled by the willful inaction of some other officers in our police department in failing to stop egregious conduct,” said Flynn.

In October 2012, the following charges were levied:

“Everybody involved has been on the force long enough to know better.  There’s no way you can justify it as some kind of inadvertent mistake.  The allegations are proven beyond a reasonable doubt and show inexcusable conduct,” Chief Flynn stated in a press conference.

Wisconsin law prohibits police officers from ever being involved in body cavity searches, regardless of probable cause.  This kind of abuse is delegated to professionals like doctors and nurses, according to Wisconsin Statute § 968.255 (3).  And they may be only performed after a search warrant has been obtained.

Rape is:  “The penetration, no matter how slight, of the vagina or anus with any body part or object, or oral penetration by a sex organ of another person, without the consent of the victim.”

This seemed to be acknowledged by the prosecution.  “I know Michael Vagnini understood the sexual undertones of what was going on,” Assistant District Attorney Miriam Falk said. “It was intended to degrade and humiliate them, and that’s what makes it a sexual assault.”  She said while Vagnini may not obtained sexual gratification from penetrating his victims’ anuses, the victims felt violated nonetheless.

Yet as part of a plea deal, prosecutors agreed to drop the sexual assault charges since Vagnini agreed to plead no contest to four felony charges and four misdemeanors.  Vagnini will no longer have to register as a sex offender.

The serial abuser and his accomplices.

In fact, all of the perpetrators were given plea deals and given light sentences.

Officer Jeffrey Dollhopf, 42, will face a $300 fine and and was ordered to 100 hours of community service for his involvement in the assaults.  Since he pleaded no contest to disorderly conduct as a party to the crime, most of his charges were wiped out. As part of his deal, he agreed to resign from the department.  He spent one full year on paid leave from the department.

Officer Brian Kozelek, 34, was given a similar deal.  After a full year of paid vacation, he now faces a $300 fine and a mere 20 hours community service.   He also agreed to voluntarily resign his position at the department.

Officer Jacob Knight, 32, will actually face a small amount of jail time.  He was sentenced to 20 days in the House of Correction, a $300 fine and 60 hours of community service after an extended amount of paid time off.

As for Officer Michael Vagnini, his record of molesting innocent people, illegal detainment, illegal searches, penetrating orifices for fun, framing people with false evidence and ruining their lives has come to a close.  After terrorizing his community for years in a most disgusting and egregious way, he will face just over 2 years behind bars — 26 months.

Attorney Jonathan Safran, representing some of the victims, said he’s “tired of the excuses” about training and supervision.  “… The concern is that it goes beyond just these officers. We have allegations of a number of other officers in a number of other districts doing some of the same kinds of things.”  Of the sentencing of Officer Knight, Safran said, ”I’m not sure if it’s strong enough.”

Vagnini’s own lawyer said Vagnini’s aggressive tactics were no secret within the department and the court system, saying the whole system encouraged and rewarded his crime fighting tactics to get drugs off the streets.  “He’s left holding the bag for everybody,” Michael Steinle told the court, citing Vagnini’s dedication to fighting crime.

If what the defense and prosecuting attorneys say is true, the corruption in Milwaukee may go a lot deeper than just the 4 officers who have been officially charged.  A deeper cleaning of the department may be in order, and only the Milwaukee mayor can see that it happens.  His contact information is provided below.

One of the ironies of this story is that sadistic, violent freaks who physically abuse the public are given lighter sentences than many of the very people whose lives were ruined and were dragged into cages for the crime of possessing arbitrary plants and substances, harming no one but themselves.

And why should twisted individuals get lighter sentences for these acts due to their wearing a badge and a uniform?  If a gang of strange men approaches a person, accosts them, threatens them with violence, detains them against their will, and penetrates their orifices with parts of their bodies, that should be considered rape or sexual assault, and those involved should be considered accomplices.  That’s what would happen to a normal person without a badge.  “Official misconduct” is only the tip of the iceberg for these monsters.

It should be noted that even if a few corrupt cops are no longer a part of the police force, the very same oppressive and unjust drug laws remain in place for future cops to abuse and destroy innocent, non-violent lives with.  There’s a lot to be disturbed with after reading this case, and the problems will not go away without serious overhaul of the department, the laws, and the legal system itself.

(Article by Jeremiah Jones; From The Free Thought Project)

IRS Targeted Small Business Owners To Steal Millions Because Of How They Managed Their...