Home Uncategorized Why Trump Believes The First Amendment Has “Too Much Protection” For Free... 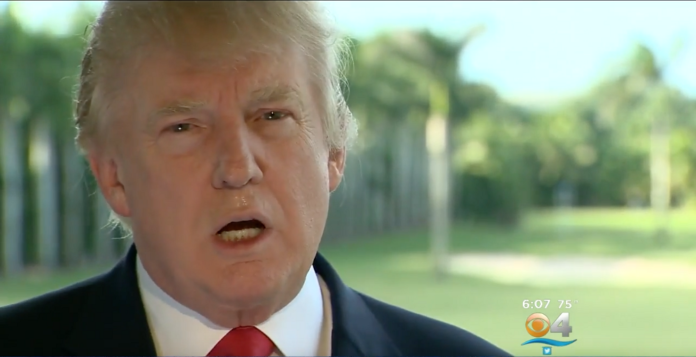 Trump is once again caught in a hypocritical conundrum, this time with the first amendment.

“Our press is allowed to say whatever they want.”

President-elect Donald Trump seems to believe we need to make some changes to the first amendment.

In an interview with CBS, Trump was asked if he believes the First Amendment provides “too much protection.”

Trump responded by saying he would like to change the laws to make it easier to sue media companies. Strangely, the famous liar Donald Trump lamented that, under current law, “our press is allowed to say whatever they want.” The Guardian also reported on a few of Trump’s famous lies and slanders during his campaign.

Trump recommends moving to a system like in England where someone who sues a media company has “a good chance of winning.”

Trump has recently threatened to sue the New York Times and the numerous women who say he has sexually assaulted them.

Trump would have a better chance of winning his lawsuits under English law where an allegedly defamatory statement is presumed to be false. There, it is up to the defendant in a libel suit to prove that their statements are true. But Trump would also have a great chance of failing should people decide to sue him for his lies and slanders.

Even if U.S. law were more like England’s, Trump might still have difficulty in prevailing against his accusers or the New York Times.

Many of Trump’s accusers have witnesses who can corroborate their stories. The reporter for People Magazine who says she was assaulted by Trump, for example, has six different people supporting her version of events.

“Nobody believes it strong than me,” Trump added.

Trump seems to be supporting the old concept of one law for the rulers and another for the people. He wants to Tweet and spread lies about those that oppose him, while at the same time he wants to restrict other, even press, from telling truths about him if they do not show him as a hero in shining armor.

US Troops Land in Norway for First Time Since WWII As Tensions Grow With...

10 Worst Food Companies That Are Poisoning You Daily And Lying About It –...