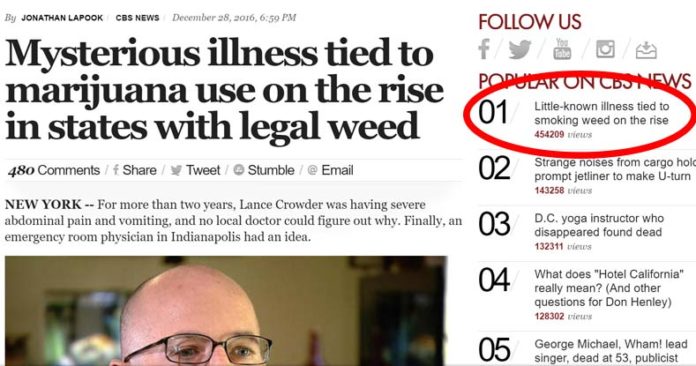 This means the rate of occurrence could actually be the same before and after legalization. If 40 people didn’t admit they smoked weed before legalization, there would be no real difference in the comparison. And, of course, this means the scary claim that a “mysterious illness” is “on the rise” could be totally wrong.

CBS doesn’t stop there, though. They use this study to claim CHS is “on the rise in states with legal weed” – even though the study is from only two hospitals.

As a final clue to the desperation of CBS in linking cannabis legalization with a “mystery illness” on the rise in legal weed states, here is a screen shot of the article.

Clicking on the top right link, “Little-known illness tied to smoking weed on the rise,” brings one to the same article with the more ominous headline — suggesting they actually changed the title to make it more ominous, and far more misleading.
By: Justin Gardner  From: The Free Thought Project