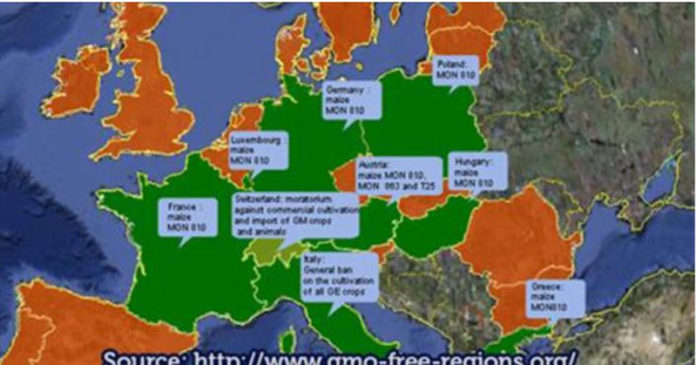 Countries that are a part of the European Union had an option to opt-out from growing GM crops through a European Commission rule passed in March 2015. The ban was especially aimed at Monsanto’s corn MON 810, since other varieties of corn or other plants are widely rejected across Europe.

In the Americas 4 countries have bans in place:
Belize, Ecuador, Peru, and Venezuela.

There are also 4 countries in Asia who have banned GM crops:
Bhutan, Kyrgyzstan, Saudi Arabia, and Turkey.

And two countries in Africa who have done the same are:
Algeria and Madagascar.

Links to detailed reports on each country are available on Sustainable Pulse.

Currently there are 28 countries that grow GM crops:

The USA is the biggest grower with 73.1 million hectares of maize, soybean, cotton, canola, sugarbeet, alfalfa, papaya, squash (See how one former president gave Monsanto a free pass to allow this; click here)

One hectare is a metric unit of square measure and is about 2.47 acres.

And just to add insult to injury, they were also banned in Scotland, the home country of Monsanto’s founder Hugh Grant. It doesn’t sound a whole lot like this technology is “feeding the world” now, does it?

Man Planted Trees In Same Spot Every Day. 37 Years Later, Stunned By What...

‘You Are My Slave’: Ga. Mom Furious After White Student Targets Son During School’s...