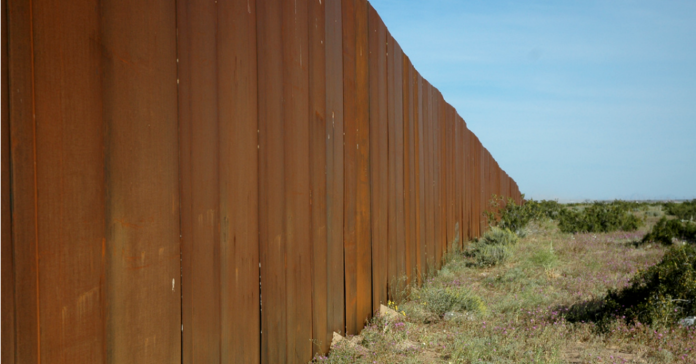 Don’t worry, President-elect adds, Mexico will pay us back (even though Mexico has repeatedly said it will not)

President-elect Donald Trump’s transition team has signaled to Republicans in Congress that Trump would like to fund his infamous planned U.S.-Mexico border wall through the Congressional appropriations process in April, House Republican officials told CNN Thursday.

In doing so, the president-elect appears poised to break one of his core anti-immigrant campaign promises: that Trump would build a wall to “keep the Mexicans out,” and that Mexico would pay for it. (Early in his presidential campaign, he even promised to force Mexico to build the wall.)

Early Friday morning, Trump defended his move on Twitter by alleging that Mexico would pay the U.S. back for the cost of building the wall:

The dishonest media does not report that any money spent on building the Great Wall (for sake of speed), will be paid back by Mexico later!

Rep. Chris Collins (R-N.Y.), congressional liaison for the Trump transition team, doubled down on Trump’s position in comments to CNN: “When you understand that Mexico’s economy is dependent upon U.S. consumers, Donald Trump has all the cards he needs to play,” Collins said. “On the trade negotiation side, I don’t think it’s that difficult for Donald Trump to convince Mexico that it’s in their best interest to reimburse us for building the wall.”

However, Mexico’s president has vociferously and repeatedly said that the country will not pay for Trump’s promised wall. “We’re not going to pay for that fucking wall,” former president Vicente Fox added last March, as Common Dreams reported.

On Twitter, commentators were swift to poke fun at Trump’s plan:

“Hello Mexico, it’s Trump. I’m ready for you to pay for that wall… Remember the wall we discussed. Hello? Hello?”https://t.co/DJ0prutQVg

When it comes to funding the wall through taxpayer dollars, Republicans “are considering whether to tuck the border wall funding into a must-pass spending bill that must be enacted by the end of April,” Politico reported Thursday.

Congressional Republicans therefore believe that appropriating funds for the wall, expected to run into the billions, will pass easily, arguing that Democrats “would fall in line [when] faced with the choice of funding the wall or shutting down the government,” reports The Hill.

And on the campaign trail last year, Trump proposed another plan for funding the wall: “sharp tariffs on money that native Mexicans send back to their families,” The Hill notes. Salon‘s Simon Maloy decried that plan as “impractical and repugnant.”

Moreover, the Associated Press reported Friday morning that the Trump transition team is also exploring ways to build a new wall without relying on new legislation authorizing it.

AP observes that “whatever steps might be taken without Congress’ approval would be likely to fall short of the extravagant new wall on the border that Trump repeatedly said Mexico would pay for. And despite Congress’ involvement in approving any spending, such an approach might also open Trump to charges of going around the House and the Senate to take unilateral actions, something he repeatedly criticized President Barack Obama for doing.”

And of course, there already exists a wall between the U.S. and Mexico. “Should Trump actually win, how could he build something that already exists?” wondered border and immigration expert Todd Miller last year.

In fact, AP notes that it’s “not clear how much could be done along the 2,000-mile border without additional actions by Congress.”

“Lawmakers passed the Secure Fence Act of 2006, but most of those 700 miles have already been built,” the wire service adds.