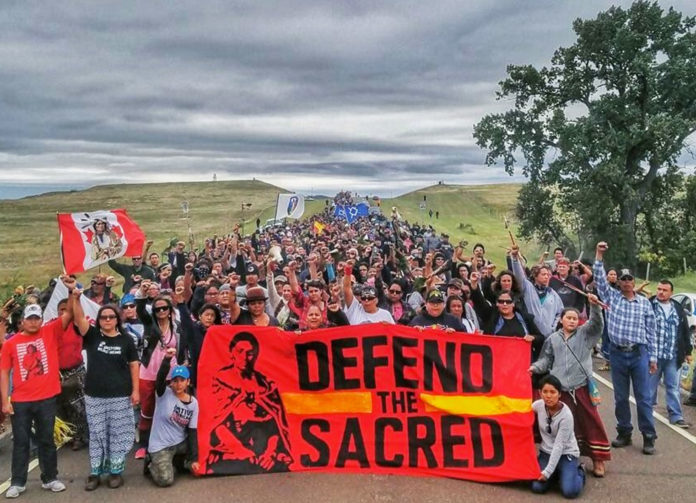 Staff at the North Dakota Public Service Commission say there is no doubt the developer of the four-state Dakota Access oil pipeline violated rules regarding reporting Native American artifacts.

The PSC maintains that ETP subsidiary Dakota Access LLC failed to get its approval before proceeding with construction in October on private land in southern North Dakota after the artifacts were found along the route.

Dakota Access chose not to inform the PSC of the artifacts they were unearthing.

Nicholson says, “Crews diverted construction so the artifacts weren’t disturbed. The State Historic Preservation Office concurred with the plan, but the PSC didn’t because it didn’t get information from the company until nearly two weeks after the artifacts had been discovered.”

The PSC filed a complaint in November and proposed a small fine of $15,000, which is ridiculously small when considering the $3.8 billion estimated price tag on the pipeline project. However, ETP chose to fight the fine anyway.

The company is taking the stance that they did not know the law. They say their team of attorneys for a multi billion dollar project was unaware of the reporting process if they uncovered ancient artifacts. When they did uncover artifacts, they chose not to check the law and were willfully ignorant and therefore, they believe, should not be accountable for breaking the law.

ETP in late November decided to fight the fine. Company attorney Lawrence Bender said that, under state law, there needs to be a willful violation of PSC orders, which he said didn’t occur. Bender’s motion also referenced public comments by PSC Chairwoman Julie Fedorchak, who said she was “disappointed” with ETP’s conduct but acknowledged it might have resulted from a miscommunication within the company. Bender said that “hardly rises to the level of willful, intentional conduct … warranting a penalty.”

Nicholson says, Schuh in his Dec. 15 response said ETP’s argument “appears to meander around a number of commission discussions with the public and the meaning of willful with little contestation of the sufficiency of the complaint.” Schuch also said that requiring intent when it comes to a regulatory offense “would make the application of regulation so cumbersome that it would clearly frustrate its purpose.”

The PSC will be deciding whether to grant the company’s motion to dismiss the case or schedule a hearing before an administrative law judge, but there is no time frame given for that decision.

Completion of the pipeline is stalled due to the Army Corps of Engineers refusing to grant the final permit necessary for the company to legally drill under the water. Massive worldwide protests with the support of thousands of U.S. veterans at the Standing Rock Sioux Camp helped to stop the pipeline.  ETP remains confidant that it was a political decision and that Trump will let them complete the pipeline through treaty land.

30 Children Rescued From An Elite Pedophile Ring Found In A Truck – Anti...