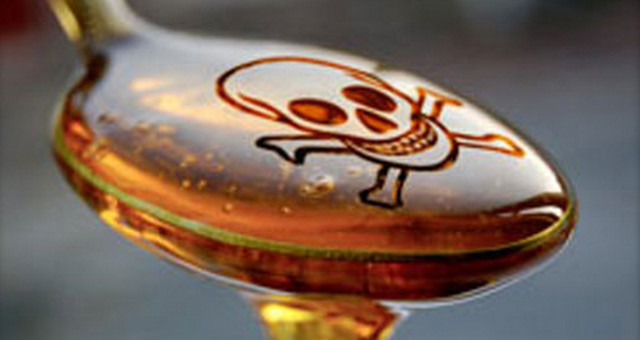 Big food has made many attempts in the past to trick consumers and rename harmful ingredients.

One of these ingredients is high fructose corn syrup.

And these are just a few of the many names used to cover up this dangerous product.

The most recent is fructose, and companies are claiming this product as a natural sweeter.

The Corn Refiners Association claims that HFCS is natural, but other studies have proved otherwise.  This is what the CRA says about HFCS…

High fructose corn syrup (HFCS), a sweetener made from corn, comes in two primary compositions—HFCS-42 and HFCS-55. This means it is composed of either 42 percent or 55 percent fructose, with the remaining sugars being primarily glucose and higher sugars (chains of glucose).

In terms of composition, high fructose corn syrup is nearly identical to table sugar (sucrose), which is composed of 50 percent fructose and 50 percent glucose. Glucose is one of the simplest forms of sugar that serves as a building block for most carbohydrates. Fructose is a simple sugar commonly found in fruits and honey.

This marketing is made to DECEIVE YOU!

This constant name-change is the food industry’s attempt to trick consumers into thinking they are buying and consuming a product made with all-natural and safe ingredients.

The truth is, it’s the exact opposite.

HFCS is a manufactured sweetener and has ZERO nutrients.

This product helps processed food companies boost their profits, but all it does for you is destroy your bodies and metabolism!

4 serious dangerous of HFCS you need to be aware of

There are dozens of reasons to stay away from this harmful product, but here are the top 5.

A review of published literature on HFCS and weight gain discovered a link between intake of HFCS beverages and obesity among children. The analysis revealed that HFCS intake contributes to childhood obesity and limiting its intake can help decrease the incidence of obesity in the same population. (source)

The effects of HFCS on metabolic and immune functions of the body have been extensively studied but studies on HFCS’ effects on the brain are far and few in between. However the results of a recent study published in 2015 revealed that HFCS intake damaged a part of the brain called the hippocampus, which is responsible for long-term memory and mood regulation, and caused inflammation in the body’s nerves, particularly in the brain. (source)

In a 2015 study by Stanhope, et. al., the results revealed a positive association between the intake of beverages sweetened by HFCS and the risk for cardiovascular illness in young adults. The higher the percentage of HFCS in a drink, the bigger the increase in the following heart disease risk factors – (1) low density lipoprotein (or bad cholesterol), (2) total cholesterol, and (3) uric acid. In the same study, HFCS disturbed the ability to the body to lower blood glucose levels after eating, causing prolonged elevated levels in the blood stream which causes damaged to the body’s organs and tissues. (source)

According to DeChristopher, Uribarri, and Tucker (2015), intake of soft drinks with HFCS has a significant correlation with incidences of chronic bronchitis in adults aged 20 to 55. Drinking non-diet sodas could potentially lead to fructose malabsorption, which has been linked to lung problems, specifically asthma. [4] In a perinatal study on pregnant mothers who had increased fructose intake, the results revealed that the higher the intake of fructose, the more likely their children would be diagnosed with asthma. (source)

How to avoid this harmful ingredient

Read labels, and try to stay away from processed foods.

Get your sugar from natural sources such as fruit, honey and stevia. Dates are a great product to use for sweetness.

If you need sugar for a recipe, it is best to use coconut sugar or raw cane sugar.

A quick note from our founder-

Over the past year, my friend Dave at PaleoHacks has been working on a secret cookbook with world-renowned Le Cordon Bleu chef Peter Servold.

Well, today this new this new incredible Paleo Cookbook is finally available to be shipped right to your door for FREE

That’s right — as a special launch promotion, we’re offering our brand new Paleo fat loss cookbook to you for free (Chef Pete lost 60 lbs using these recipes!) — All you have to do is just cover a small shipping cost (international shipping is a bit more).

Get your FREE copy of Paleo Eats Here. (Grab this today, because we only ordered a small batch of these cookbooks for this freebie promotion, and they will sell out FAST!)

11 Cancer Causing Foods That Should Be Avoided – Anti Media News

This New Anti-Anxiety Cannabis Milk is Coming to a Store Near You Soon –...