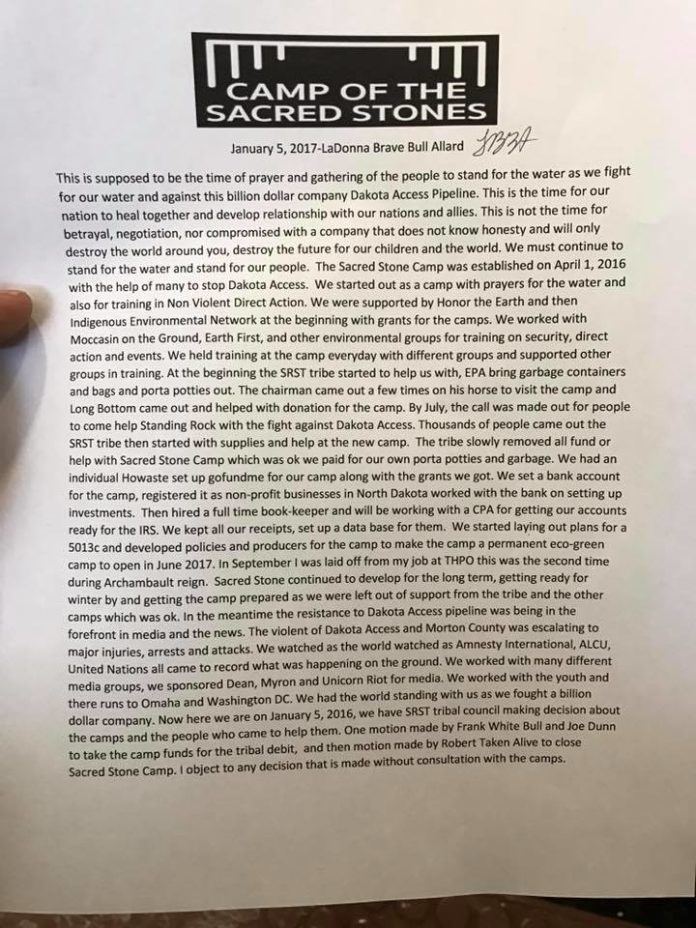 This sudden move — although not entirely unexpected — sends a shock to the heart of hundreds encamped at Sacred Stone and thousands more enduring the bitter and relentless North Dakota winter in several camps nearby.

Cannon Ball, ND — In an astonishingly abrupt move, the Standing Rock Sioux Tribe Council went rogue and voted to shut down the Camp of the Sacred Stones  — the original encampment set up by Indigenous youth — and to apply all funds donated in support of the camps to pay off the tribe’s debts.

As LaDonna Brave Bull Allard — head of what has become known as Sacred Stone and owner of the property on which it sits — said in a statement at the council meeting today in sharp protest of the motions,

“This is supposed to be the time of prayer and gathering of the people to stand for the water as we fight for our water and against this billion dollar company Dakota Access Pipeline. This is the time for our nation to heal together and develop relationships with our nations and allies.

“This is not the time for betrayal, negotiation, nor compromise with a company that does not know honesty and will only destroy the world around you, destroy the future for our children and the world.”

Standing Rock Tribe Chairman Dave Archambault II — long believed by some to be corrupt — claimed in the meeting the camps have rampant health and hygiene issues and must be shut down.

“We’re not sitting around taking donations,” Archambault stated, addressing rumors he and other leaders had simply taken donation money for themselves, “but when it comes to the tribe, this council is accountable and responsible for the members it represents — fiscally responsible. So, we’ve always been transparent, whenever resources come to the tribe.”

That assertion has been disputed by among tribal members and other water protectors who have spent time in the camps — particularly as the tribe had claimed in the past it supported opposition to the pipeline’s construction. But after a chain of celebrities, a group of military veterans, and other notable people visited the camp, it seemed too much attention was trained on the tribe — and its politics.

LaDonna, as she is most commonly called by water protectors, continued:

“By July, the call was made out for people to come help Standing Rock with the fight against Dakota Access. Thousands of people came out. The SRST tribe then started with supplies and help at the new camp. The tribe slowly removed all fund or help with Sacred Stone Camp which was okay, we paid for our own porta potties and garbage.”

She added Sacred Stone had hired CPAs to manage donations, set up non-profit status for the camp, and kept track of all receipts from purchases made for winterizing and other purposes. But, as LaDonna added,

“Sacred Stone continued to develop for the long term, getting ready for winter by and getting the camp prepared as we were left out of support from the tribe and the other camps, which was ok.”

Now, two council members under Archambault’s guidance, have proposed a tragic end to the oldest camp in Standing Rock — and the complete removal of all water protectors who have called the site home — some of them since opposition to Dakota Access began.

Indeed, some water protectors gave up their lives to support opposition to Dakota Access — leaving behind jobs, friends, and, in some cases, families for months at a time. Many intended to stay for the duration — until the construction is halted.

Many well-meaning outsiders have also been at least somewhat betrayed, as they would have assumed monetary contributions given in support of the camps would be applied exactly to that — not to the Standing Rock Tribe to do with as it pleased.

So, this sudden move — although not entirely unexpected — sends a shock to the heart of hundreds encamped at Sacred Stone and thousands more enduring the bitter and relentless North Dakota winter in several camps nearby.

Archambault previously used the cover of a delay imposed by the U.S. Army Corps of Engineers to declare, falsely, a victory over Dakota Access and attempted to effect a mass evacuation of water protectors. After that announcement, the atmosphere became noticeably hostile at Standing Rock, as leaders seemed to both worry for campers’ safety in the subzero temperatures — and resent their massive presence.

“In the meantime, the resistance to Dakota Access Pipeline was being in the forefront in media and the news. The violence of Dakota Access and Morton County was escalating to major injuries, arrests and attacks. We watched as the world watched as Amnesty International, ACLU, United Nations all came to record what was happening on the ground. We worked with many different media groups, we sponsored Dean, Myron and Unicorn Riot for media. We worked with the youth and their runs to Omaha and Washington DC. We had the world standing with us as we fought a billion dollar company.

“Now here we are on January 5, 2016. We have SRST tribal council making decisions about the camps and the people who came to help them. One motion made by Frank White Bull and Joe Dunn to take the camp funds for the tribal debit, and then motion made by Robert Taken Alive to close Sacred Stone Camp. I object to any decision that is made without consultation with the camps.”

Confirming suspicions, Archambault, White Bull, and Dunn have now broken the ultimate promise — that opposition to the Dakota Access Pipeline would last until the ‘black snake’ had been shut down completely — in one stunning move contrary to everything the Standing Rock Sioux Tribe claimed to hold sacred.

It’s imperative to note the tribe council isn’t acting on behalf of all its members as it claims — many want all of the camps to remain in place until the permanent end to Dakota Access.

However, that Water Is Life, Mni Wiconi, is apparently of little concern — for a select group of people — when money and corruption instead take precedence.

Agent Orange: 24 Chilling Photos Of The War Crime The US Got Away With