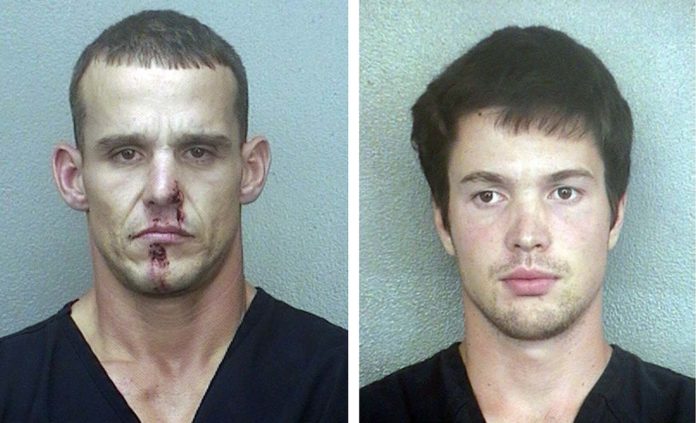 The Fort Lauderdale police department had an epic blunder when they arrested the man pictured above on the right, because he looked like the man on the left, who was an armed burglary suspect.

The Florida police department kept him in jail, even though he did not commit the crime and evidence suggested his innocence, according to Photography is not a Crime.

Dmitry Lyubimov was not released until authorities finally admitted they had absolutely no physical evidence to link him to the crime.

Lyubimov and the city came to a wrongful arrest settlement agreement for $150,000.

Lyubimov was minding his own business on the streets of Fort Lauderdale when he was arrested by police in July 2011, the South Florida Sun Sentinel reports.

Police thought he matched the description of the real suspect, Justin White. Both are pictured above with Lyubimov on the right. You can see the lack of similarity in the picture.

Two eye witnesses even told police they could not identify Lyubimov as the burglar.

The Sentinel says, “Two people who encountered the armed burglar that day in July 2011 told police they could not identify Lyubimov as the man they saw — information that never made it into any of the police reports of the incident.”

A 911 call was made because White was walking on someone’s property with a gun. Officers Jesus Gonzalez and Felicia Barnwell responded to the scene and tried to stop White, who then fled on a stolen scooter.

White ditched his scooter, then hopped over a fence, leaving only his hat behind.

As the officers searched the streets for him, they came across Lyubimov, who was dressed in similar attire, mistaking him for White, and arresting him.

Lyubimov denied the allegations. And his phone records even showed that he was on the phone with his girlfriend during the police chase.

But police decided to arrest him anyway.

“So with cops still chasing me I am dialing my girlfriend and talking to her for 25 min instead of thinking how to escape police,” he wrote while in jail in 2011.

“It don’t make no sense. I am just frustrated with all this. It all is like a bad dream or [something]. OK, hopefully it will end soon,”

The scooter that the real burglar dumped was tested for fingerprints days after the incident; and as Lyubimov knew, they did not match Lyubimov’s fingerprints.

The police waited 7 months to do a DNA test on the hat that was dropped, and it proved that Lyubimov was not the owner of the hat. The DNA test matched the DNA of Justin White, just like the fingerprints from the scooter.

Lyubimov’s attorney, Hugh Koerner, said, “It’s their self-assuredness and their refusal to believe that they could be wrong that failed them. They have a responsibility not just to apprehend criminals, but to protect the innocent.”

Lyubimov filed suit shortly after being released and the settlement was finally reached this week.

Commissioner Bruce Roberts said it is not only the police that are responsible for this “serious error,” but also prosecutors who charged him and let him stay in jail when police had physical evidence proving he was innocent. “I think some other aspects of the criminal justice system failed rather badly here, too,” Roberts said.

Federal Civil Rights Indictment For Officers Who Beat Men And Lied About It –...