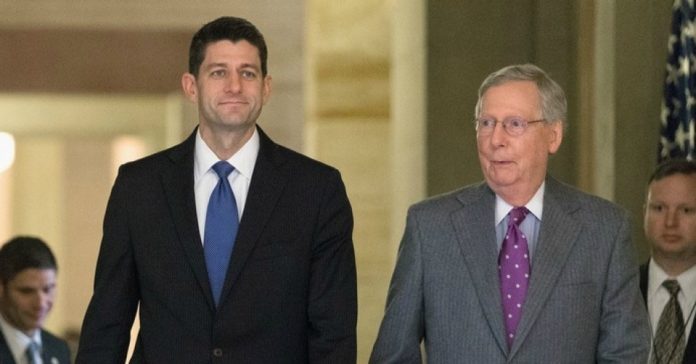 Republican leaders racing to tear down as many as 20 million (pdf) individuals’ healthcare without providing a replacement, it turns out, also don’t want the American people to know how much the repeal will cost.

The very same rules package (pdf) in which the GOP had attempted to gut the Office of Congressional Ethics also contains a provision that exempts repeal of the Affordable Care Act (ACA), also known as Obamacare, from the Congressional Budget Office’s (CBO) 10-year cost analysis.

“In other words,” reported Shareblue, the news site owned by Hillary Clinton ally David Brock that drew attention to the measure, “the new Republican rules package specifically instructs the CBO not to say how much it would cost to repeal Obamacare”—a provision that “distorts” federal budget analysis “for political gain.”

As Shareblue pointed out, following a section of the bill (on page 25) that instructs the director of the CBO to conduct a 10-year cost analysis of each bill reported by the House, a subsection lists the areas to which the directive will not apply:

(4) LIMITATION.—This subsection shall not apply to any bill or joint resolution, or amendment thereto or conference report thereon—

(A) repealing the Patient Protection and Affordable Care Act and title I and subtitle B of title II of the Health Care and Education Affordability Reconciliation Act of 2010;

(B) reforming the Patient Protection and Affordable Care Act and the Health Care and Education Affordability Reconciliation Act of 2010; or

(C) for which the chair of the Committee on the Budget has made an adjustment to the allocations, levels, or limits contained in the most recently adopted concurrent resolution on the budget.

Try as they may to conceal the cost of the repeal, an independent study published Thursday estimated that it could cost the states trillions in lost revenue and output.

The study, conducted by the Commonwealth Fund and George Washington University’s Milken Institute School of Public Health, argues that the repeal of both federal premium tax credits and Medicaid expansion without a viable alternative would result in a $140 billion cut in federal funding by 2019, which in turn would trigger “losses in employment, economic activity, and state and local revenues.”

Most of the federal healthcare funding “flows to hospitals, clinics, pharmacies, and other providers,” which in turn hire and pay staff, as well as “purchase goods and services, like clinic space or medical equipment” from vendors who also “pay their employees and buy additional goods and services.”

This repeal scenario “would result in nearly 3 million lost jobs by 2021” and widespread state economic losses, the study notes. It continues: “From 2019 to 2023, there will be a cumulative $1.5 trillion loss in gross state products and a $2.6 trillion reduction in business output (combined transactions at the production, wholesale, and retail levels). State and local tax revenues also will fall during this period, dropping by $48 billion.”

Next week, the Senate is expected to vote on a budget reconciliation bill that includes repeal of the ACA with no clear plans for an alternative.

Meanwhile, the vast majority of Americans do not want Congress to dismantle the program “until the details of a replacement have been announced,” according to new poll by the Kaiser Family Foundation.

“Right now, to say repeal is easy. To provide a replacement, which the American people are going to demand, is going to be difficult, if not impossible.”
—Rep. Raúl Grijalva (D-Ariz.)

With this sort of public opposition, many are hoping that the same organized outrage that led to the Republicans’ backtrack on the ethics rule change can also pressure lawmakers to rethink other unpopular—and outlandish—policies.

Speaking to Democracy Now! on Wednesday, Rep. Raúl Grijalva (D-Ariz.) said that the “flood of calls, emails, and appeals that hit every office in Congress” in response to the ethics panel subterfuge is exactly the way that people will “be able to affect, to resist, and to stop some of the worst instincts that this Congress is going to have.”

“Those of us that are in Congress that are opposed to what’s going on are a voice,” he continued. “But the real power in holding back some of the worst instincts of Trump and the majority in the House and in the Senate is going to come from people themselves. And I think that bodes well, and that is a good example of how that should be done.”

Looking forward to the ACA fight, he said that he thinks Republicans are “going to have to back down,” particularly in the face of public resistance.