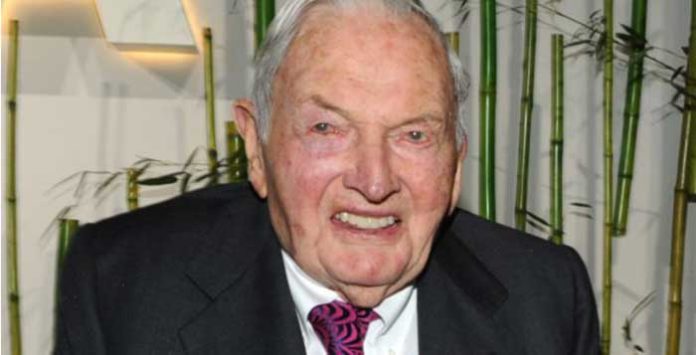 David Rockefeller is a part of American history and the only billionaire in the world who is over 100 years old. The richest oldest man on the planet is due to turn 101 in June.

He is part of a family dynasty whose name is associated with America and has become legend. His grandfather John D Rockefeller who died in 1937 was the founder of Standard Oil and the world’s richest individual.

One such conspiracy theory is the creation of a ‘one world order’, according to which a group of ‘Elites’, including David, are milking the system for their own benefits and the benefit of their friends and fellow conspirators against the interest of the United States.

They have been accused of setting up institutions such as the ‘Trilateral Commission’ and the ‘Bilderberg Group’ among others to advance their interests nationally and globally.

Their aim is to create an international world order under a single umbrella, to deal with global issues, initiated and controlled by western countries.

Obviously such a hefty vision could be seen as a conspiracy, by the powerful and the well connected, to dominate and manipulate the weak and the fragmented people of the world.

David Rockefeller, the last former member of the unofficial royal family of America, has admitted in an article by The Independent, that if he is accused of such conspiracies to bring about a ‘one world order’, then he is proud and guilty as charged.

He says: “Some even believe [the Rockefellers] are part of a secret cabal working against the best interests of the United States, characterising my family and me as ‘internationalists’ conspiring with others around the world to build a more integrated global political and economic structure – one world, if you will. If that’s the charge, I stand guilty, and I’m proud of it.”

Although the name ‘Rockefeller’ still retains its resonance, its influence is fading. Being a Rockefeller these days ain’t what it used to be.

Cops Who Tasered Handcuffed Teen on His Testicles Until He Died – On Video...

Police Shoot Man For Recording Them With Phone, They Feared For Their Lives