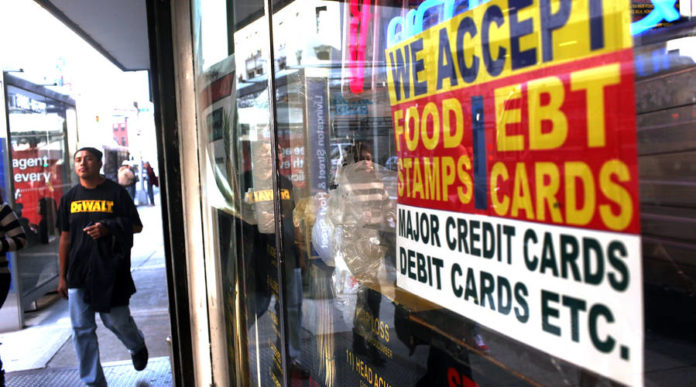 Food stamp spending has declined for the last two years, with 13.7% of the population currently using the program compared to a high of 14.9% in 2013, but that hasn’t stopped the GOP from looking to cut billions from the program. Many believe that the Democrats making a robust defense of food stamps would be politically unwise, but a new paper suggests this assumption might be incorrect.

Supplemental Nutrition Assistance Program, or SNAP, continues to be viewed as a third-rail issue for many political observers. Since the late ’70s (in addition to advocating for cuts), Republicans have waged an ideological war against the very concept of handouts, often tapping into racial and gender stereotypes in the process. Throughout the 1980s, Ronald Reagan frequently chastised SNAP for allowing “some young fellow ahead of you to buy a T-bone steak” while “you were waiting in line to buy hamburger.” Haney-López, author of Dog Whistle Politics: How Fifty Years of Coded Racial Appeals Wrecked the Middle Class, points out that this was the toned-down version of Reagan’s original anecdote:

When he first field-tested the message in the South, that “young fellow” was more particularly described as a “strapping young buck.” The epithet “buck” has long been used to conjure the threatening image of a physically powerful black man often one who defies white authority and who lusts for white women. When Reagan used the term “strapping young buck,” his whistle shifted dangerously toward the fully audible range. “Some young fellow” was less overtly racist and so carried less risk of censure, and worked just as well to provoke a sense of white victimization.

The historian Premilla Nadasen makes a direct link between these tropes popularized by Reagan and the arguments made by the Clinton administration when it passed welfare reform in 1996. Clinton’s welfare reform bill was “rooted in a culture of povertyargument,” writes Nadasen, “evidenced by his racially coded language of dependency and people taking advantage of the system.”

The brutal legacy of Clinton’s legislation continues to be felt by the country’s poor. In 2016 over 500,000 adults lost their SNAP benefits as a direct result of the 1996 law, which dictates that unemployed individuals between the ages of 18-49 who aren’t disabled or raising minor children can only have access to the program for three months.

Some chalk up such Democratic policies as little more than realpolitik, a way to outflank the right on galvanizing issues. Even food stamp advocates often concede that the safety net can be a tough sell, and the numbers indicate they’re right. A 2013 poll showed that two-thirds of Americans supported kicking 4 million people off of food stamps. Statistics like this might suggest that a Democratic defense of food stamps would be a political liability, but a new study reaches a much different conclusion.

In his paper, “Electoral Consequences of Welfare State Expansion: The Case of the Food Stamp Program,” Ohio State professor Vladimir Kogan examines how food stamps programs impact the ballot box. His conclusions are striking and might surprise many: he discovered that Democrats gained voters in counties where the program had been implemented. Kogan’s paper shows that Democrats paid an initial electoral price when food stamp programs were first introduced, but that the negative impact quickly faded away. Kogan notes that in the decade-long rollout of the American food stamp program, Democrats gained votes as a result of new supporters.

Unsurprisingly, Kogan discovered that, “the boost delivered by the program was largest in counties with high poverty and [food stamp program] enrollment, rising to roughly 3.5 percent of the two-party vote in counties with poverty rates higher than the national median in 1960.”

Speculating on the exact reasons behind the wider bump, Kogan writes:

One possibility is that the new welfare benefit changed voting behavior among existing voters, persuading some to change their vote in response to the policy change. Alternatively, the program may have worked to mobilize latent Democratic supporters who had previously not bothered to vote (see, e.g., Pop-Eleches and Pop-Eleches 2012). Although it is impossible to disentangle these effects completely in the absence of individual-level public opinion data, the results in Table 5 appear more consistent with mobilization rather than persuasion. Overall, I find that the introduction of food stamps in each county increased the number of votes won by Democratic presidential candidates by approximately five percent.

Kogan’s findings seemingly point to yet another reason why the GOP wants to eradicate SNAP; its success negatively impacts Republicans’ chances of winning elections. It also drives home a direct point that flies in the face of some conventional wisdom: programs that benefit the most politically marginalized citizens can lead to real electoral victories.

By: MICHAEL ARRIA  From: Raw Story

Outraged Milwaukee Residents Lash Out At Sheriff For Threatening To Make Critic Disappear –...

DoD Audit Shows $1 Billion Worth Of US Weapons May Have Went To ISIS...