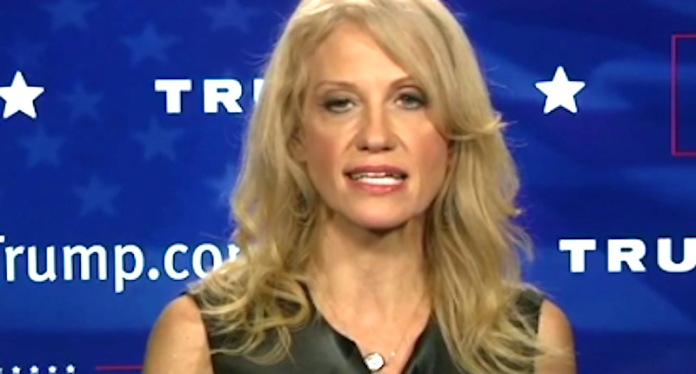 Trump loyalist Kellyanne Conway, however, didn’t think Streep’s speech was appropriate. She wanted Streep to make her speech about unifying behind Trump, regardless of what he says or does.

Conway also thought Streep should have used the platform to “give the shoutout to the mentally challenged boy who last week was tortured live on Facebook for half an hour, by four young African-American adults who were screaming racial and anti-Trump expletives and forcing him to put his head in toilet water.”

“We have to now form a government, and I’m concerned that somebody with a platform like Meryl Streep is also, I think, inciting people’s worst instincts,” Conway said. “When she won’t get up there and say, ‘I don’t like it, but let’s try to support him and see where we can find some common ground with him, which [Trump] has actually done from moment one.”

Even though Conway claimed that Trump has worked to unify the country ever since day 1, his record shows quite the opposite. Trump has been in high-profile feuds with celebrities ranging from Meryl Streep to Arnold Schwarzenegger to the cast of Hamilton and SNL, while at the same time regularly skipping out on intelligence briefings. Not to mention the huge spike in hate crimes committed by Trump loyalists since his election victory.

Trump, as expected, took to twitter to insult the actress:

Meryl Streep, one of the most over-rated actresses in Hollywood, doesn’t know me but attacked last night at the Golden Globes. She is a…..

Hillary flunky who lost big. For the 100th time, I never “mocked” a disabled reporter (would never do that) but simply showed him…….

“groveling” when he totally changed a 16 year old story that he had written in order to make me look bad. Just more very dishonest media!

See another clip of Conway talking about Streep:

.@KellyannePolls: I’m concerned that somebody with a platform like Meryl Streep’s is inciting people’s worst instincts pic.twitter.com/QjITaedKnV