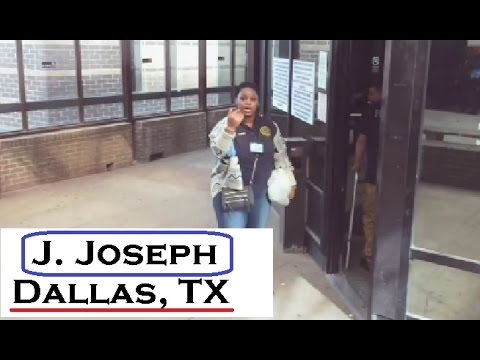 While filming the breezeway between the Sheriff’s Office of Dallas and the county justice complex, a photographer was assaulted, battered, and verbally threatened for legally filming. The cameraman was ensuring that his tax dollars are spent appropriately by conducting a public service audit of Dallas county. (Video Above)

As dozens of Dallas county employees were leaving the complex, presumably at shift change, some deputies took offense to the photographer’s presence. An employee identified as J Joseph declared “I’m going to take that phone,” and proceeded to chase the photographer down the public walkway. She then declares loudly, “I’m going to whoop his ass” and proceeds to remove her belt to “tear [his] little ass up.” Other Dallas Sheriff’s employees can be heard cheering Joseph on; “Whoop his ass!” and “Go get him J!”  Another deputy grabbed the photographer by the arm in an attempt to physically bully and detain the photographer. He successfully fled the scene with only minor abrasions.

Police threatening deadly force upon peaceful people for nothing more than photography is not entirely unusual, but it is rather unusual for municipal employees to be brazen in their intimidation tactics.