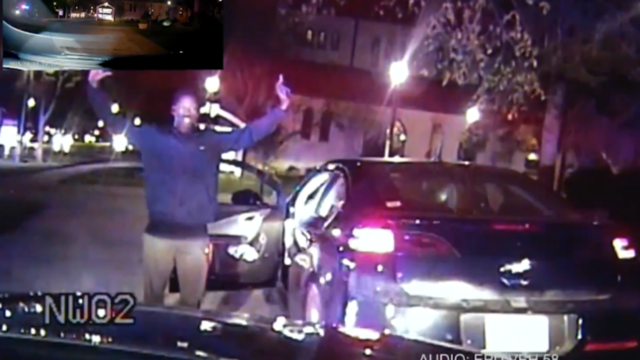 This past Wednesday Evanston Police released harrowing dashcam footage of the 2015 arrest of an African American man who was suspected to have stolen the car her was driving in- however, as it turned out- the vehicle ended up being be his own.

On the night of October 10, 2015, Lawrence Crosby an engineering doctoral candidate at Northwestern University, was working on his car around 7:00 PM when a woman passing by suspected him to be stealing the vehicle. Following her 9-1-1 call she followed Crosby to tell his dispatcher of their location.

Crosby, had his own dash cam video recording in his car, and he can be heard telling someone he felt he was being followed (which he was). He was heading to the police station for his own safety due to his suspicions, but ended up getting stopped in a church parking lot before he could arrive. Instead of being held by police, what followed ended up in his assault at the hands of police.

As reported by Craig Wall for Fox32 writes:

The dashcam video shows him get out with his hands up with a cellphone in his hand and he then gets taken down by officers who thought they were dealing with someone who stole a car.

“I’m cooperating…sir, you’re on video… that’s an FYI,” Crosby can be heard telling the officers. He had moved to the front of his car to put himself within view of his own camera.

Evanston Alderman Brian Miller, who is running for Mayor, said he was infuriated at what the video showed, particularly in light of the fact that there have been five incidents in the last two years where he says police have not de-escalated minor incidents.

He pushed for the release of the video and says this case needs to be a wakeup call for the Evanston Police Department.

“I understand being a police officer is a tough job, but we need them to exercise judgment in their day to day operations. And in this situation, within ten seconds of Mr. Crosby getting out of his car with his hands in the air, he was tackled, he was kneed while he was standing up, then he was punched repeatedly by multiple officers, for allegedly stealing his own car. Our police officers need to be better than that,” Alderman Miller said.

Crosby was charged with resisting arrest and disobeying officer, but a judge threw out those charges. Crosby filed a civil rights lawsuit against Evanston Police in 2016 and that case is now pending.

Evanston Police found the use of force justified, but in light of this incident, they said the department has changed it’s policy so that subjects do not need to be taken down by officers during an arrest.

Evanston Police issued a video statement on their YouTube channel, along with the dash cam video and 9-1-1 call.

Interactions like the one between Crosby and the Evanston police are on the rise. High profile cases of unarmed Black men killed in situations like this are becoming too commonplace to brush under the rug and is indicative of the deeper rooted problems within law enforcement involving issues of racial profiling and racism as a whole. The Evanston PD, are not taking responsibility for the actions of their employees as they  have stated they felt the force used was adequate and justified.

Do you think the same would have been said had Crosby been white?

If Police departments blindly support their officers in their wrong doing, this will allow emboldened officers to continue with their poor behaviour all while feeling justified to do so.

What are your thoughts on the whole situation? Do you think Crosby has a good case for his Civil suit?

“Our Source Is Not The Russian Government” – Anti Media News