Home News “I’m a Defeated Man. I Wanted To Illuminate The Whole Earth!” –... 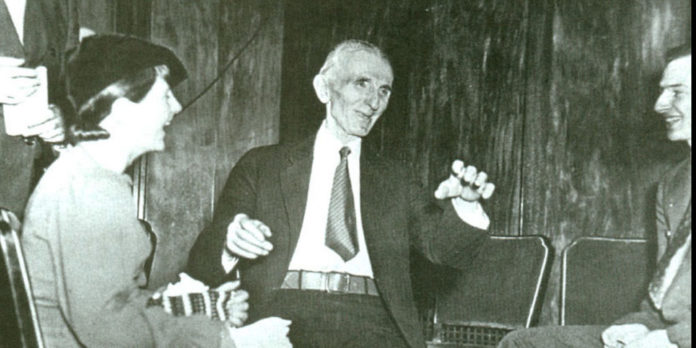 Intriguing interview with Nikola Tesla and John Smith in which he said: Everything is the Light. In one of its rays is the fate of nations, each nation has its own ray in that great light source, which we see as the Sun. And remember: no one man that existed did not die.

JOURNALIST: Tell me, please, under what conditions Angel adopt on the Earth?
TESLA: I have ten of them. Keep good records vigilant.

JOURNALIST: I will document all your words, Dear Mr. Tesla.
TESLA: The first requirement is a high awareness of its mission and work to be done. It must, if only dimly, exist in the early days. Let us not be falsely modest; Oak knows that it is oak tree, a bush beside him being a bush. When I was twelve, I have been sure I will get to Niagara Falls. For most of my discoveries I knew in my childhood that I will achieve them, although not entirely apparent … The second condition to adapt is determination. All that I might, I finished.

JOURNALIST: What is the third condition of adjustment, Mr. Tesla?
TESLA: Guidance for all the vital and spiritual energies in labor. Therefore purification of the many effects and needs that man has. I therefore have not lost anything, but just gained.
So I enjoyed every day and night. Write down: Nikola Tesla was a happy man…
The fourth requirement is to adjust the physical assembly with a work.

JOURNALIST: What do you mean, Mr. Tesla?
TESLA: First, the maintenance of the assembly. Man’s body is a perfect machine. I know my circuit and what’s good for him. Food what nearly all people eat, to me it is harmful and dangerous. Sometimes I visualize that chefs in the world are all in conspiracy against me … Touch my hand.

JOURNALIST: It was cold.
TESLA: Yes. Bloodstream can be controlled, and many processes in and around us. Why are you frightened young man?

JOURNALIST: Imagination is more real to you than life itself?
TESLA: It gives birth to the life. I have fed by my taught; I’ve learned to control emotions, dreams and visions. I have always cherished, as I nurtured my enthusiasm. All my long life I spent in ecstasy. That was the source of my happiness. It helped me during all these years to bear with work, which was enough for the five lives. The best is to work at night, because the stellar light, and close bond.

JOURNALIST: You said that I am, like every being, the Light. This flatter me, but I confess, I do not quite understand.
TESLA: Why would you need to understand, Mr. Smith? Suffice it to believe it. Everything is light. In one its ray is the fate of nations, each nation has its own ray in what great light source we see as the sun. And remember: no one who was there did not die. They transformed into the light, and as such exist still. The secret lies in the fact that the light particles restore their original state.

JOURNALIST: This is the resurrection!
TESLA: I prefer to call it: return to a previous energy. Christ and several others knew the secret. I am searching how to preserve human energy. It is forms of Light, sometimes straight like heavenly light. I have not looked for it for my own sake, but for the good of all. I believe that my discoveries make people’s lives easier and more bearable, and channel them to spirituality and morality.