Home Crime Cops in No Hurry to Help Woman and Her Kids When Another... 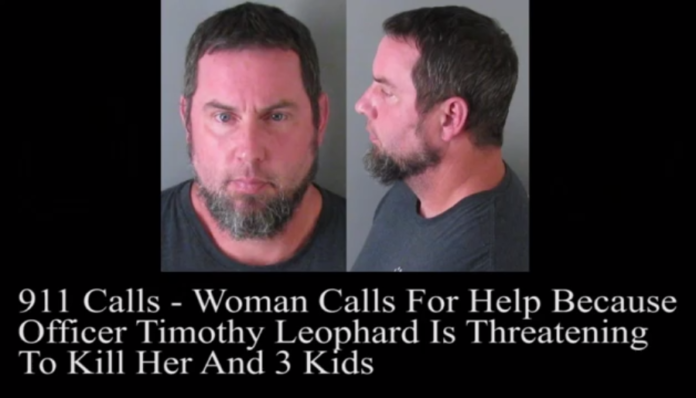 A Gaston County police officer was arrested after pointing a gun at a woman with three young girls in the room, threatening to kill them, on Christmas Eve. Officer Timothy Leophard, 42, is charged with three counts of assault with a deadly weapon with a minor present. The incident took place on December 24. According to warrants, Officer Leophard pointed an “AR style rifle with magazine” at a woman and threatened to kill her. The warrants state three girls, ages 9, 10 and 14, were present at the time. The bulk of the ordeal was captured on a series of 911 calls.

The Gaston County Police Chief says it’s too early to say if Leophard will be suspended.

If you think not firing the officer is mindboggling, then you’re in for a real treat. If you listen to the 911 calls, dispatch was in no hurry to send police in to rescue the victims. At one point in the audio recording, the woman tells the dispatcher that nobody has shown up yet (referring to help). The dispatcher tells the woman that the police want to call and talk to her.  At another point, the 911 call is ‘accidentally disconnected’.

Both 911 calls lasted over 14 minutes in total. During this time, not one officer arrived on scene to help. Instead of sending in armed cops against one of their own, police decided to ‘help the victim’ by calling and talking to her.

I can’t even pretend to understand the mentality of police officers and how they try to protect their own. I do know that if you or I had been in a similar situation, SWAT would have busted through the door and killed me, at the least.

03:33 – 06:25 You can hear the violent officer threatening his family and the caller begging for her life. Caller informs dispatch (officially) it’s a violent cop that is threatening her and her family.

07:23 – 9:20 Caller explains the situation, again, to a new dispatcher. Lots of silence during this time.

09:21 – 11:05 [Caller] Almost 10 minutes have passed since the initial call, Callers asks dispatch if the police are on the way. Dispatch says there are a lot of cops “in the area”. Dispatch wants to know why he’s drunk, asks if they are getting divorced. There is a lot of silence in this section.

11:06 –  14:07 [Dispatch] Tells Caller that cops are NOT on scene, they are down the road, having a ‘meeting’, and that cops don’t want to ‘move in’ because he has a weapon. More silence. Caller lets Dispatch know they have a dog (so they don’t shoot it).

14:08 – Dispatch asks the Caller for her number, tells her that the cops want to call her and speak with her. Call ends at 14:18

Okla. Mayor Apologizes After Husband, Friends Dress Up As KKK To Scare Kids For...

Man Planted Trees In Same Spot Every Day. 37 Years Later, Stunned By What...