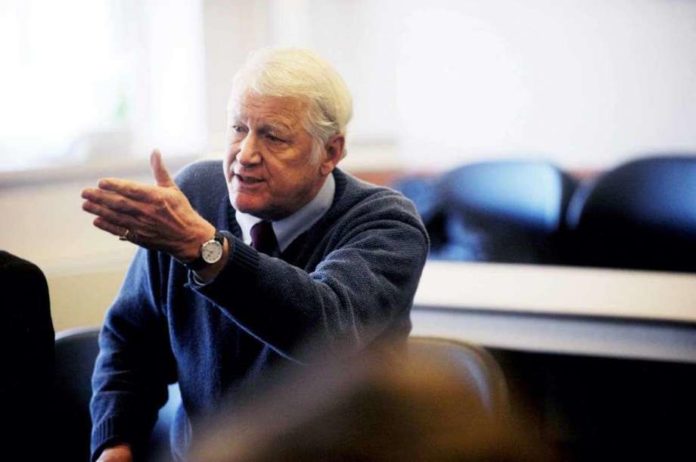 In a soon to be Trump led country, people seem to be emboldened by a leader that says powerful people can sexually assault women with no consequences.

The Westport Daily Voice reports, “A well-known Greenwich Republican called a town worker “nothing but a bloodsucking lazy union employee” and later reached in from behind to place his hand between her legs and pinch her in the groin area, according to the police arrest warrant.”

Christopher von Keyserling, 71, was arrested Wednesday in Greenwich Town Hall and charged with fourth-degree sexual assault, a misdemeanor. He was released on a $2,500 bond and given a court date of Jan. 25.

The incident began at about noon Dec. 8 when the 57-year-old woman encountered von Keyserling in the hallway of an unnamed town facility, the warrant said.

The two had a brief political disagreement when the woman told him that “it was a new world politically” and he had to educate his fellow politicians. Von Keyserling is a member of Greenwich’s Representative Town Meeting.

Von Keyserling, a member of Greenwich’s Representative Town Meeting since 1985, allegedly replied: “I love this new world, I no longer have to be politically correct,” according to the warrant.

She told him that if he was “proud of that I can’t help you,” after which he called her a lazy, bloodsucking union employee, the warrant said.

When the woman tried to walk away, von Keyserling allegedly reached from behind to place his hand between her legs and pinched her in the groin. He said “it would be your word against mine and nobody will believe you,” the woman claimed.

“In almost 30 years of practicing law in this town, I would say Mr. von Keyserling is the one person I would never suspect of having any inappropriate sexual predilections,” Russell said, noting his client is in his 70s. “There was a playful gesture, in front of witnesses. It was too trivial to be considered anything of significance. To call it a sexual assault is not based in reality,” the lawyer said.

Police said surveillance recordings from the day of the incident are consistent with the woman’s claims.

Are we really living in a country where people think it is a trivial thing to grab women’s genitals?  Help spread the news and let people know this is NOT acceptable behavior, even if Trump is the president!

U.S. Citizen And Father of 4 Was Imprisoned By ICE For Nearly 2 Years...

‘We Are Allowed to Punch, Kick’: Ohio Police Attempt to Justify Brutal Beating of...