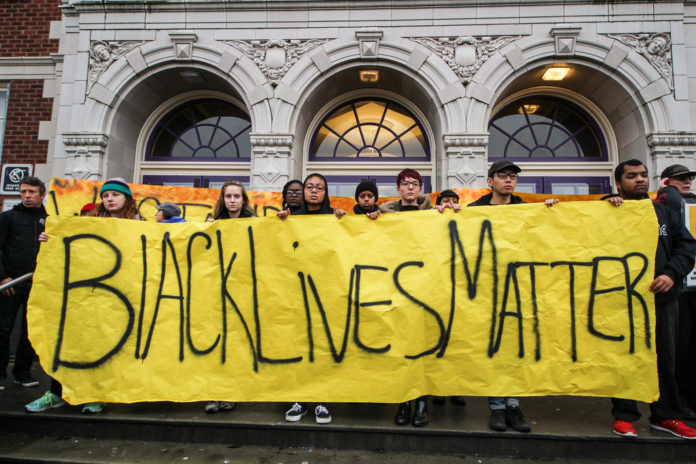 A White Baltimore city school teacher wanting to show her solidarity with the “Black Lives Matter” movement has found her request to have the words “Black Lives Matter” along with the image of a raised fist printed on her Wells Fargo debit card rejected. Rachel Nash wanted to “make a statement with an image” but despite the banking giant’s advertisement of giving their customers “the ability to personalize the credit cards and debits cards with that reflect what’s important to you -the choice is yours,” as their website displays- what was important to Rachel Nash was not approved. 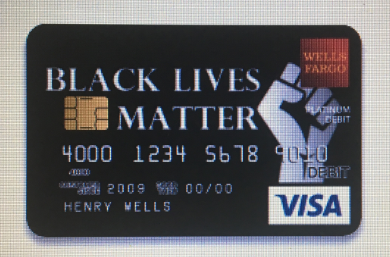 When her city erupted in protests over the 2015 death of a young black man, Freddie Gray, from an injury sustained while in police custody, the white English teacher had ironed “Black Lives Matter” onto a gray tank top and wore it to school. She wanted to express solidarity with a national movement protesting the string of police killings of black citizens and signal to students that she was willing to listen.

Now Nash, who says she’s fed up with white people who freely disparage black youth in front of her, wants to extend the conversation to cashiers and others she interacts with while she buys groceries, gets coffee, dines at restaurants — wherever and whenever she uses her debit card.

“A lot of white people in Baltimore have really problematic views about race, and they feel like because I’m a white person I agree with them automatically,” Nash, 29, said. “This is one way I can demonstrate regularly that I am not complicit in whatever their views are.”

But Wells Fargo rejected her design.

Two days after she submitted her image online, Nash received an email Thursday morning informing her that her design did not meet the company’s guidelines.

Nash called customer service to find out why.

She recalled the response: “As soon as I said ‘Black Lives Matter,’ [the customer service agent] said, ‘Oh, that’s why it got rejected.’ She said Wells Fargo ‘didn’t want to be associated with any antisocial or offensive organizations.’ ”

Stunned, Nash repeated the words to make sure she had heard correctly and asked for further explanation.

At first Wells Fargo deemed the message “antisocial” and when Nash contested, they then moved towards it being “political”.

“She said that if ‘Black Lives Matter’ were on my card, it might offend people,” Nash said. She eventually reached a supervisor who repeated the original reasoning that it was “offensive and antisocial.”

A Wells Fargo spokesman said on Friday that it rejected Nash’s image because company policy “prohibits political and trademarked or copyrighted images.”

It may come as a surprise to Wells Fargo, but “Black Lives Matter” as movement cannot become a trademarked brand.

The U.S. Patent and Trademark Office has rejected applications to trademark “Black Lives Matter” for clothing sales because the slogan is “commonly used in rallies dedicated to raising awareness of civil rights, protesting violence, and conveying the message of support for the same.”

Kris Dahl, the spokesman, said that customers who submit images such as the fist Nash used must typically prove they created them.

Dahl said in an emailed statement that the company will be reaching out to Nash to apologize for the way she was treated on the phone because “it did not correctly reflect the reason for the decline and was counter to our commitment to treating our customers with respect.”

“The purpose of our Card Design Studio service is to give customers the opportunity to personalize their cards, and its guidelines aim to preserve the political neutrality of our products,” the statement said. “Wells Fargo respects individuals’ right to their opinions and causes, and when Wells Fargo rejects or approves an image, that’s not a reflection of Wells Fargo’s rejection or endorsement of the customer’s political view or cause.”

The saga highlights the sensitive line businesses walk between appealing to consumers and avoiding offense while protecting their brands. A swastika would warrant a clear rejection, Dahl said. As would a Confederate flag.

What’s really upsetting is that the statement “Black Lives Matter” is being equated as equal to a swastika in Wells Fargo’s position. While one image would symbolize a movement for the empowerment of a disenfranchised race, the other is a symbol that represents bigotry and genocide- the two are incomparable.

What about a card with the words “Choose Life” for those who oppose abortion rights?

“Generally speaking, we would err on the side of caution as to what is considered political,” Dahl said in an interview.

The company has a litany of rules stating which types of designs are unacceptable, including trademarked logos, images of celebrities and copyrighted cartoon characters. Wells Fargo will also reject “violent, offensive, anti-social, or death imagery,” sexual content, dead animals, political or religious imagery and “socially unacceptable or discriminatory” signs as well as images of flags — except the American flags featured in the company’s photo gallery, according to the original rejection email Nash received.

If customers do not want to upload their own images, Wells Fargo’s website displays a gallery of approved photos for debit and credit cards: puppies and penguins, waterfalls and mountains, the Golden Gate Bridge and the Taj Mahal. More than a dozen sports teams are also featured, but not the Washington Redskins.

There’s also a gay pride collection of preapproved images including a rainbow flag and a “We are family” button next to a pink triangle. Dahl told The Washington Post that Wells Fargo is comfortable in its support for gay rights and does not consider rainbows to be a political statement.

He said Wells Fargo similarly celebrates black history and culture through its “Untold Stories” collection of credit card images rolled out in February during Black History Month. The images include a boombox and a black family embracing one other.

Nash shared her disappointment over the bank’s rejection of her Black Lives Matter design with her students during a discussion about financial literacy.

“These banks are very excited to sign my kids up for credit cards as soon as they get to college, but they are not supporting the people who live in my city,” Nash said. “It’s hard for students to hear that big businesses they expect to be inclusive are not. And a lot of them said they don’t feel like doing business with Wells Fargo.”

Nash is not giving up. She has submitted another design to Wells Fargo. This one says “Black People Are Important.”

But that, too, will be rejected, Wells Fargo told The Post.

“Because of the political nature of the second image, it will also be declined,” Dahl said.

What do you make of Well’s Fargo’s stance to decline Nash’s request for the BLM message to be printed on her card? Do you think that slogans like “Make America Great Again” would make the cut? What of their preemptive decision to decline her future request to have “Black People are Important” printed on her cards? Does it send a message to Black Americans in this country that their lives really don’t matter, and they are not important to a company like Wells Fargo? Tell us your thoughts in our comments section below.