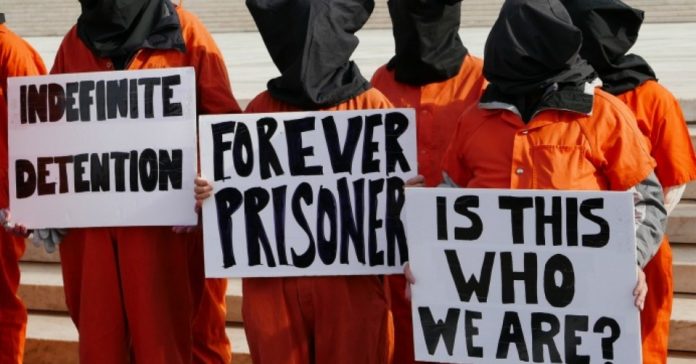 In Gitmo, America has institutionalized the idea of indefinite detention without charge or trial.

The Obama administration made clear Tuesday that it would not be fulfilling its promise to close the notorious Guantánamo Bay prison.

Speaking to reporters, White House Press Secretary Josh Earnest said, “I don’t anticipate that we will succeed in that goal of closing the prison, but it’s not for a lack of trying. ”

He put the blame on “the politics that members of Congress in both parties, frankly, played with this issue,” and said that its remaining open is “not a good use of taxpayer dollars, and it certainly isn’t the most effective way to protect our country.”

The comments come on the heels of the release of 10 detainees to Oman, leaving 45 men to continue their indefinite detention at the facility now beginning its 16th year of operation.

They also come nearly eight years after Barack Obama began his presidency with an executive order to shut down the facility, and just days before President-elect Donald Trump takes office.

Trump, for his part, tweeted earlier this month, “There should be no further releases from Gitmo,” and on the campaign trail last year promised to “load it up with some bad dudes.”

That prompted members of the Congressional Progressive Caucus (CPC) last week to urge Obama to deprive Trump of “the tools to reinstate torture,” and Margaret Huang, executive director of Amnesty International USA to warn: “We are incredibly concerned about human rights in the upcoming Trump administration, and that includes the president-elect’s promise to expand Guantánamo’s population. We cannot risk letting this institution of injustice become permanent.”

Witness Aganist Torture, an organization that has engaged in numerous demonstrations to highlight the abuses at the facility, decried the continuation of the “giant crime scene.”

“The continued existence of the detention facility at Guantanamo is a devastating policy failure for President Obama and stain on his legacy,” stated Jeremy Varon with Witness Against Torture. “The prison never should have existed in the first place, and it should not exist now. It is a place of torture, a giant crime scene with which the United States has never fully reckoned. In Gitmo, America has institutionalized the idea of indefinite detention without charge or trial. Holding exclusively Muslim men, the prison is also the fiercest edge of an Islamophobia that has only gathered steam.”

“And Guantanamo lies at the ready for Trump or even some future president to re-populate with U.S. captives,” he continued. “Sadly, it remains a part of the America’s security apparatus, laws, and very soul.”

Here’s What The Media Doesn’t Want You To Know About The Manchester Attack –...

Workers to Have Microchips Implanted in Their Hands – Anti Media News