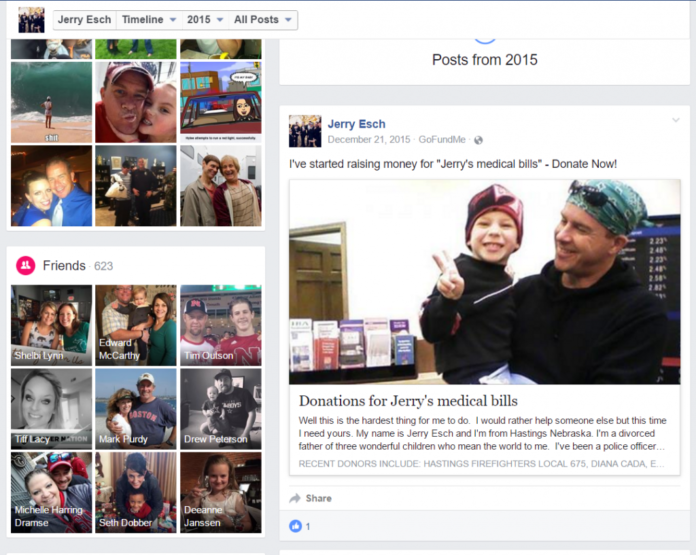 Officer Jerry Esch, of the Hastings Police Department in Nebraska, has been arrested for defrauding dozens of people after setting up a fraudulent ‘GoFundMe’ account.

Back in November, Officer Jerry Esch created a GoFundMe page to raise $27,000 for “excessive medical bills”.  Though he didn’t quiet reach his goal of $27k, he did manage to raise $21,284. Out of that money, only $650 went to pay medical expenses.

According to WOWT, the rest of the money went to pay off credit card bills, personal loans, and a divorce attorney.
Hastings Police Chief Pete Kortum said his department was made aware of the Go Fund Me page. He said statements made on the page were inconsistent with the City of Hastings insurance plan which is why they wrote to the Attorney General’s office to have the Nebraska State Patrol investigate.

Though Chief Kortum will not disclose the details of Officer Esch’s termination from the department, he did say that “Since Mr. Esch’s employment status with Hastings Police Department is a personnel matter, we will only confirm that he was no longer employed by the City of Hastings.”

A quick look on Officer Jerry Esch’s Facebook page, shows that he has consistently asked for donations on the GoFundMe page. Here is a screen shot of one such instance, dated December 21st, 2015 – which was several months after his cancer went into remission. Though you can’t see his actual GoFundMe page, as it has been removed from the site due to fraud, his ‘heartfelt’ message to potential donors, begins with this:

Well, this is the hardest thing for me to do. I would rather help someone else but this time I need yours…

* Normally, I don’t include pictures of officer’s family members, especially minor children. However, this picture is one that scumbag and lowlife Officer Esch uploaded publicly to GoFundMe.

I guess with using the picture of innocent looking child, Officer Esch figured it would help more people make an emotional donation, rather than a practical one.

At any rate, it worked. He successfully scammed dozens of family members, friends, fellow police officers, school teachers, firefighters, and even the local Firefighters’ Union.

Missouri Trooper Plead Down to Misdemeanor in Drowning Death of Hand-cuffed Suspect in his...