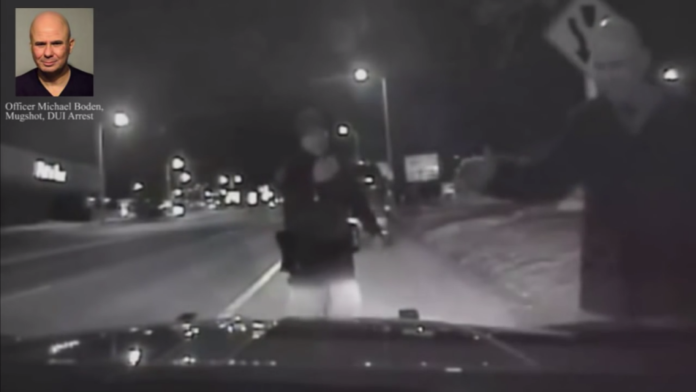 A Milwaukee police officer was arrested for DUI according to the Milwaukee County Sheriff’s Office. Officer Michael Boden, 52, is also facing charges of recklessly endangering public safety by use of a dangerous weapon and being armed while intoxicated.  According to the press release, Bowden held his badge out the window of the vehicle he was driving when he was pulled over for lane deviation shortly after 6 a.m. Sunday on W. Blue Mound road at N. 83rd St.

In the police dash cam video, it doesn’t take long for this DUI stop to turn bizarre. Officer Boden began accusing the responding Milwaukee County Sheriff’s deputy of stopping him out of revenge, claiming the two had known each other for decades.

Officer Boden was asked on multiple occasions to perform a field sobriety test, which he refused – which is his right. However, the reason he refused to participate was because he doesn’t trust cops.

The video shows the deputy asked Boden to put his hands at his side.

“You don’t wanna do it? You wanna refuse?” the deputy asked.

Boden’s reason for the refusal was that the traffic stop was done out of revenge.

“You and I have gone down this path a long time ago,” Boden said.

“Yeah, how much have you had to drink? No, it`s not payback,” the deputy said.

“It`s not payback. What do you want me to do?” the deputy said.

The video shows a lieutenant eventually arrived and asked the officer why he wasn’t complying.

“Known who?” the lieutenant asked.

“This man, and I’ve known him to not be a very good person,” Boden said.

When asked whether Boden and the deputy have any history, a spokeswoman with the Milwaukee County Sheriff’s Office pointed to a specific point in the video.

Nevertheless, the video shows Officer Boden said he’s not doing any test — not for the deputy and not for his supervisor.

“I have no idea why I was pulled over,” Boden said.’

“So you weren’t drinking or you were drinking?” the lieutenant asked.

This would be Boden’s first OWI (DUI).

Think Banning Refugees Is Bad? Then You Need to Know How They Were Created...