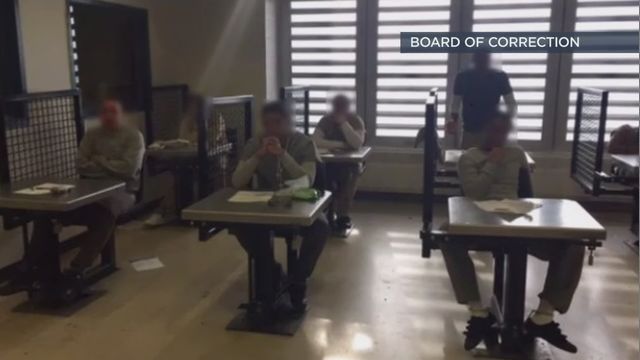 New York’s department of corrections under the de Blasio administration have been trying new ways to combat violence on Rikers Island. One of these ways was to end the practice of solitary confinement for youth, but the practice they have since replaced it with may be even worse.

Instead of solitary confinement- youth inmates deemed violent, spend 17 hours a day in their cells and the remainder when they are supposed to be let out, is spent in a communal space chained to a desk alongside other inmates for the other 7 hours a day.

Graphic images of the practice were exposed by a member of the city’s jail oversight board. 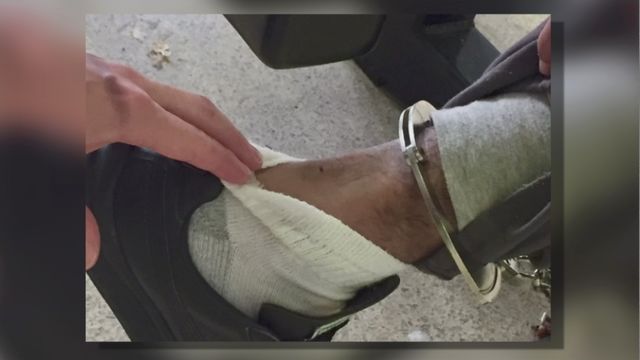 As reported by Erin Corbett for NY1:

“The young adults, at this point, would prefer to be in solitary confinement than in this protracted restraint, which is harmful, harsh, and humiliating,” said Bryanne Hamill of the board of corrections.

Hamill plastered them on screen during a board of correction meeting earlier this week, slamming the administration for the practice.

As she was giving this presentation, the commissioner of the department of correction, Joseph Ponte, put on his scarf, his coat, and then walked out.

Shortly thereafter, the other Rikers staffers there left too.

“I did not think the department of correction would cease this practice, and I thought the public had a right to know,” Hamill said.

This has set up an unprecedented fight between the city’s department of correction and its oversight board.

It was the board that gave the department approval to set up the unit — that was before the restraint desks came into play.

The board has to sign off on the unit for it to continue.

Since it was a member of the board which exposed the cruel practice, and Riker’s staffers have since left since its exposure, the unit may be permanently shut down if there are insufficient votes to keep it running.

For now, potentially to avoid that vote, the city’s correction department issued an emergency variance, a technical maneuver which allows it to keep operating at least temporarily.

Officials argued that the unit provides a “level of security, separation, and control that does not exist elsewhere,” which is necessary for the safety of young adults.

That process has also raised some questions from advocates.

“People are actually chained to a desk. They can’t get up, they can’t walk around,” said Zachary Katznelson of the Legal Aid Society. “You are either in your cell or you are chained to a desk, and that certainly sounds punitive to me.”

How Riker’s is run and especially how it treats its youth sheds light on how the system doesn’t truly wish to rehabilitate young offenders, instead simply house them until their sentence is served, or until they re-offend as adults and return to the system. The ACLU writes:

The “school-to-prison pipeline,” a disturbing national trend wherein children are funneled out of public schools and into the juvenile and criminal justice systems. Many of these children have learning disabilities or histories of poverty, abuse, or neglect, and would benefit from additional educational and counseling services. Instead, they are isolated, punished, and pushed out.

“Zero-tolerance” policies criminalize minor infractions of school rules, while cops in schools lead to students being criminalized for behavior that should be handled inside the school. Students of color are especially vulnerable to push-out trends and the discriminatory application of discipline.

Chaining children to desks as repercussions for their actions is cruel and unusual punishment, and should absolutely be abolished. Alternatives need to be put in place to rehabilitate these youth and lessen their chances of reoffending as opposed to creating an environment that only brews contempt and distrust from the youth to those in positions of authority. Even when members of the board spoke out against this, the system still found excuses to make it acceptable.

What do you think about the practice of being chained to a desk for 7 hours a day in lieu of solitary confinement? Is it a better alternative, or do you think it is cruel and unusual punishment- especially for youth? Share your thoughts with us in our comments section below. 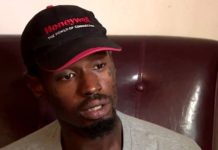 Black Man Ran Over By Police After They Mistake Him for Suspect, Is Later Arrested While Real Suspect Gets Away 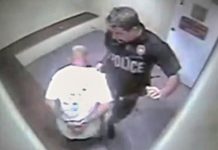 There Are Currently 64,000 Black Women Missing In The U.S.

Another Mosque Set on Fire In Florida – Anti Media News