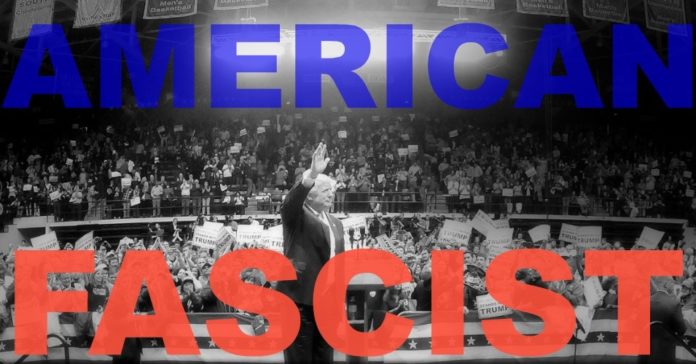 I have watched, listened to, and read many commentaries on the inaugural address but so far none of the mainstream pundits have used the one word that best identifies Donald Trump: fascist.

The United States is not Weimar Germany. Our economic problems are nowhere as bad as those in Depression-era Germany. Nobody in the Trump administration (not even Steven Bannon) is calling for mass genocide (although saber-rattling with nuclear weapons could lead to global war if we’re not careful).

That said, it is useful for Americans to recognize that we are facing something entirely new and different in American history. Certainly none of us in our lifetimes have confronted an American government led by someone like Trump in terms of his sociopathic, demagogic, impulsive, and vindictive personality (not even Nixon came close).

“We’ve never seen a president with so little familiarity with the truth; he is a pathological liar, on matters large and small.”

We are witnessing something new in terms of the uniformly right-wing inner circle with whom he’s surrounded himself and appointed to his cabinet. We must adjust our thinking and view with alarm his reactionary and dangerous policy agenda on foreign policy, the economy, the environment, health care, immigration, civil liberties; and poverty. We have to be willing to sweep aside past presidential precedents in order to understand Trump’s willingness to overtly invoke all the worst ethnic, religious, and racial hatreds in order to appeal to the most despicable elements of our society and unleash an upsurge of racism, anti-semitism, sexual assault, and nativism by the KKK and other hate groups. We need to suspend our textbook explanations about the American presidency in order to recognize Trump’s ignorance about our Constitutional principles and the rule of law; and his lack of experience with collaboration and compromise. We’ve never seen a president with so little familiarity with the truth; he is a pathological liar, on matters large and small.

We cannot take solace in the fact that Trump lost the popular vote or that only 25 percent of all eligible voters actually voted for him. Instead, we must face clearly the reality that Trump now presides over a federal government in which all three branches are controlled by right-wing corporate-funded Republicans. We may be lucky to discover that Trump might be an incompetent leader and unable to unite the Republicans, but we shouldn’t count on it.

“From this day forward, it’s going to be only America first, America first,” Trump said. By branding his message “America First,” Trump was echoing and invoking a motto of the isolationist, anti-Semitic crusade in the 1930s that wanted the United States to appease Hitler.

Indeed, Trump’s entire speech was a kind of Alice-in-Wonderland crazy quilt of words that meant the exactly opposite of what was expressed. It was an angry rant, reflecting the personality traits of an insecure bully: narcissistic, thin-skinned, revengeful, and impulsive, lacking empathy or humility.

Fascists claim to speak for “the people,” while pursuing policies that overwhelmingly benefit a handful of the favored – families, cronies, corporations, and loyalists.

Like other fascists, Trump claimed to speak for the “forgotten men and women,” whose voice has been ignored, whose job has been exported, whose neighborhood is unsafe, whose living standard has declined.

Fascists always attack current politicians while claiming the mantle of “the people.”

“We will no longer accept politicians who are all talk and no action,” Trump said today, using the same words he used several days earlier to defame Cong. John Lewis, a civil rights icon who, unlike Trump, put his body on the line countless times to make America a more humane and inclusive society.

Fascists seek to unite the country behind a smokescreen of patriotism while scapegoating the weak and powerless.

“We are one nation, and their pain is our pain,” Trump said. “We share one heart, one home and one glorious destiny.”

But his speech was a series of deflections away from the core problem facing the United States: the growing power of a tiny wealthy elite – sometimes called the “1%” but in reality the .001% — over our economy and politics.

Trump has populated his Cabinet and top advisors with some of America’s wealthiest and greediest people, corporate robber barons, militarist zealots, Wall Street titans, right-wing conspiracy theorists, anti-Semites, and racists, some of them (like Trump) born wealth but who have demonstrated no inclination for public service or even noblesse oblige.

To deflect attention away from the super-rich, Trump – like fascists throughout history – points his fingers at and scapegoats others. In today’s speech, he avoided explicit reference to Mexican immigrants, Muslims, China, Hollywood, the media, unions, and Jews – groups he castigated throughout the campaign. But his address included many dog whistles that his core supporters understand.

“To deflect attention away from the super-rich, Trump – like fascists throughout history – points his fingers at and scapegoats others.”

“We’ve defended other nations’ borders while refusing to defend our own,” was Trump’s dog whistle to America’s white supremacist “alt right” movement, who want to deport undocumented immigrants while eliminating the social safety net from those who live here and contribute to our society.

Trump personifies the worst aspects of corrupt crony capitalism. He inherited his father’s real estate empire, made possible by federal government housing subsidies. He has curried favor with Democratic and Republican politicians at the local, state and national level by contributing millions of dollars in campaign donations. He has abused the nation’s bankruptcy and tax laws to avoid his responsibility to his lenders, employees, business partners, and the country as a whole.

In his address, Trump pledged that “We will follow two simple rules: Buy American and hire American.” But Trump has used undocumented immigrants to construct his glitzy apartment buildings and hotels. Most of the ties, suits, shirts, and other clothing items sold as part of the Donald J. Trump Collection are made in overseas sweatshops.

Like fascists everywhere, Trump’s speech included a list of troubles he intends to fix, without pointing out that they were caused by the policies, people, and principles he embraces.

He described: “Mothers and children trapped in poverty in our inner cities, rusted out factories scattered like tombstones across the landscape of our nation. An education system flush with cash but which leaves our young and beautiful students deprived of all knowledge. And the crime and the gangs and the drugs that have stolen too many lives and robbed our country of so much unrealized potential. This American carnage stops right here and stops right now.”

Meanwhile, he’s appointed a corporate mogul as Labor Secretary with a track record of abusing his employees and opposing the minimum wage. He’s named a billionaire Education Secretary who has spent hundreds of millions of her inherited fortune to destroy public education in favor of corporate-backed private charter schools. He’s named as his Commerce Secretary a law-abusing hedge fund manager who has proposed a tax law that will provide huge tax breaks to the very rich and an infrastructure plan designed to enrich the rich while saddling the middle class with higher taxes.

“The wealth of our middle class has been ripped from their homes,” Trump said, having named as Treasury Secretary a Wall Street tycoon who made his fortune ripping off consumers, illegally foreclosing on working families, and discriminating against low-income and minority communities and borrowers.

In his speech Trump pledged to “harness the energies, industries and technologies of tomorrow.” But’s nominated to be Secretary of State the head of the nation’s largest oil company, someone who has made billions by polluting the environment, denying the reality of global warming, lobbying against clean energy technologies, and forging an alliance with Vladimir Putin.

Trump’s speech included no mention of human rights. He avoided any reference to police abuses or the epidemic of gun violence made possible our lax gun laws. He said nothing about rising inequality. He ignored the dramatic spike in hate crimes – against Muslims, Latinos, Jews, gays and lesbians, and others – that has plagued the country since his election in November. He evaded any mention of homelessness, climate change, or the plight of refugees around the world.

We should not have expected, and did not get, any remarks about civil rights or civil liberties – tenets which Trump has consistently violated and defamed throughout this career and his campaign.

We must view Trump as a real threat to our institutions, to our democracy, and to our future. The Trump presidency and Trumpism is a new phenomenon in our country’s history. Never before has such an authoritarian personality been president. We’ve had demagogues in the House and Senate, but never in the Oval Office. The best primer to understand what we’re facing is Philip Roth’s 2004 novel, The Plot Against America, a counter-factual history in which Franklin Delano Roosevelt is defeated in the 1940 presidential election by the pro-Hitler, anti-Semitic aviator Charles Lindbergh.

Americans will soon see that Trump’s promises were empty.

Already, opposition movements are in motion, preparing to challenge his appointments, his lies, and his policies, and preparing for the 2018 and 2020 elections, when Trump can be neutralized.

But, at the moment, our stance must be one of resistance and opposition.