Home News As Everyone Watches The Inauguration, Violence Returns To Standing Rock – Anti... 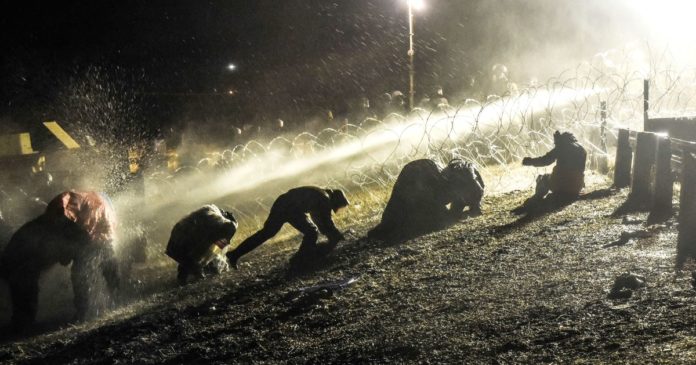 After a relatively quiet December and early January, tensions are running high at the site of the Dakota Access Pipeline near Cannonball, North Dakota. Over the weekend, water protectors with the Standing Rock Sioux and their allies once again clashed with the Morton County Sheriff’s Department and the National Guard.

On Monday, Tuesday, and Wednesday, social media accounts connected to the fight against the DAPL and in support of the Sioux posted several videos showing law enforcement using tear gas and rubber bullets on water protectors who attempted to set up a tipi on Backwater bridge off highway 1806. Social media reports state law enforcement grabbed an “unknown amount of water protectors.” Backwater Bridge was the site of conflict throughout the months of October and November.

The Morton County Sheriff’s announced 21 arrests on Wednesday night via their Facebook page. The following is an account of the protests as reported by the Sheriff’s office:

On Monday night, the water protectors held rallies and marches to commemorate Martin Luther King Jr. Day. According to the Sacred Stone Camp:

“Hundreds of water protectors led a prayer walk to the razor wire barricade approximately 700 feet from the drill pad where the Dakota Access Pipeline is proposed to cross the Missouri river.  Law enforcement fired tear gas, pepper spray, and rubber-coated steel bullets at point blank range, hitting one person directly in the eye. A total of 14 water protectors were arrested, and some were held in cold dog kennels overnight.”

In the background of the ongoing violence, legal battles over the fate of the Dakota Access Pipeline continue to be fought. On Wednesday, U.S. District Court Judge James Boesberg denied DAPL attorneys’ attempt to stop the Army Corp of Engineers from conducting an Environmental Impact Statement (EIS) on the Lake Oahe crossing. Following Boesberg’s decision, the Army Corps of Engineers officially published a notice of intent in the federal register to prepare a partial EIS. The legal process now moves into the formal comment period, which lasts until February 20. The EIS was ordered after the Corps denied a permit for Energy Transfer Partners, DAPL’s parent company, to build the final easement under Lake Oahe.

Despite the call for an EIS, the Standing Rock Sioux say the Corps is neglecting to do a full environmental study. “The proposed scoping fails to include the entire length of the pipeline or downstream impacts of other tribes of the Great Sioux Nation,” the Sioux write.

Another court decision issued on Wednesday officially ended the Standing Rock Sioux tribe’s efforts to fight the pipeline via the legal system. The U.S. Circuit Court of Appeals ruled that the Sioux had no standing in their arguments against construction. The Sioux were attempting to get the court to issue a preliminary injunction to stop construction on the Dakota Access Pipeline based on threats to sacred and cultural sites. In early October, more than 100 scientists from universities across the United States issued an open letter, stating that they “support halting any construction of the DAPL until revised environmental and cultural assessments are carried out as requested by Standing Rock Sioux Tribe.”

For the time being, it seems the fight against the Dakota Access Pipeline will continue in the fields of North Dakota rather than the courts. The incoming fossil fuel-friendly Trump administration is likely to move on the project soon. Water protectors are preparing to put their bodies on the line to stop a project that threatens the environment, their culture, and the health of future generations.

From: The Indigenous People

D.C. Cop Under Investigation For Wearing a White Power Shirt While On The Job...

Medicine, Elections, Food, The Media…You Are Living In A Fabricated Fairy Tale – Anti...