Home News Borders Closed to Those Who Share Plans to Attend Women’s March on... 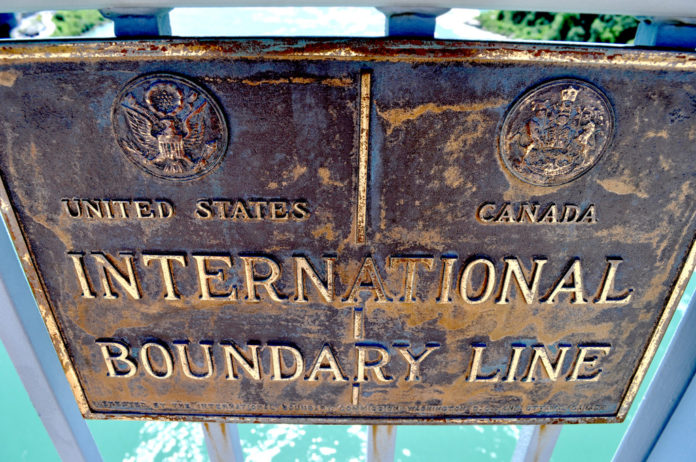 With President Trump now sworn in, glimpses of how his fascist regime will operate over the next four years have already begun. It appears that the current administration is already closing its borders to those they believe hold dissenting values to those of their own, and repressing the free speech of those who oppose the new POTUS.

Would be protesters planning to attend the Women’s March on Washinton found themselves turned away from the Canada/US border when they revealed their intentions to attend the march. Apparently voicing your opinion of Trump, and wanting to stand up for women’s rights may even be punishable by arrest.

As reported Ashifa Kassam for Alternet:

Montrealer Sasha Dyck was part of a group of eight who had arranged online to travel together to Washington. Divided into two cars, the group – six Canadians and two French nationals – arrived at the border crossing that connects St Bernard de Lacolle in Quebec with Champlain, New York, on Thursday.

The group was upfront about their plans with border agents, Dyck said. “We said we were going to the women’s march on Saturday and they said, ‘Well, you’re going to have to pull over’.”

What followed was a two-hour ordeal. Their cars were searched and their mobile phones examined. Each member of the group was fingerprinted and had their photo taken.

Border agents first told the two French citizens that they had been denied entry to the US and informed them that any future visit to the US would now require a visa.

“Then for the rest of us, they said, ‘You’re headed home today’,” Dyck said. The group was also warned that if they tried to cross the border again during the weekend, they would be arrested. “And that was it, they didn’t give a lot of justification.”

Dyck described it as a sharp contrast to 2009, when the research nurse made the same journey to attend Barack Obama’s inauguration. “I couldn’t even get in for this one, whereas at the other one, the guy at the border literally gave me a high five when I came in and everybody was just like, ‘welcome’. The whole city was partying; nobody was there to protest Obama the first time.”

UK national Joe Kroese said he, a Canadian and two Americans were held at the same border crossing for three hours on Thursday.

The group had travelled from Montreal, where 23-year-old Kroese is studying, and had explained to border agents that they were considering attending the Women’s March but had yet to finalise their plans.

After being questioned, fingerprinted and photographed, Kroese and his Canadian companion were refused entry because they were planning to attend what the border agent called a “potentially violent rally”, he said. The pair was advised not to travel to the United States for a few months, and Kroese was told he would now need a visa to enter the US.

After an attempted crossing late Thursday, Montreal resident Joseph Decunha said he was also turned away. He and the two Americans he was with told the border agent that they were planning to attend the inauguration and the women’s march.

The group was brought in for secondary processing, where the border agent asked about their political views, Decunha told the Canadian Broadcasting Corporation. The first thing he asked us point blank is, ‘Are you anti- or pro-Trump?”

This question, regardless of the answer should not be the sole determinant to allow a decline entry into the US. If this is the way the US will start treating citizens of their allied nations, what of others?

After being fingerprinted and photographed he was told that his two friends could enter the US, but that he could not. “They told me I was being denied entry for administrative reasons. According to the agent, my travelling to the United States for the purpose of protesting didn’t constitute a valid reason to cross,” Decunha said.

He described the experience – particularly the questions he fielded about his political beliefs – as concerning. “It felt like, if we had been pro-Trump, we would have absolutely been allowed entry.”

US Customs and Border Protection said it could not discuss individual cases, citing privacy reasons. “We recognize that there is an important balance to strike between securing our borders while facilitating the high volume of legitimate trade and travel that crosses our borders every day, and we strive to achieve that balance and show the world that the United States is a welcoming nation,” it said in an email to the Guardian.

On a daily basis, more than 1 million individuals are admitted into the United States at its air, land and sea ports, the agency noted. An average of 600 people a day – less than a tenth of 1% of those admitted – are denied entry for a varied list of reasons that include prohibited activities or intent as well as national security concerns.

The consequences of these border lockdowns will be that travelers visiting the United States will no longer be forthcoming with what their intentions to visit are. Diplomacy will crumble, and it is already predicted that travel to the United States during Trump’s reign is set to plummet. Security will be tighter and not for any productive reason, or even for the increased safety of the American people, but only for the intention to abide by the new fascist regime and keep dissenting individuals out.

What do you make of the border guard’s decision to turn away would-be protesters planning to attend the Women’s March on Washington? Is the fight for the rights of women so dangerous to society that those who lend their support to the cause should be turned away- and even arrested for just trying to attend? While entry into the US by noncitizens is never guaranteed, do you think the reasoning by guards were justified? Let us know in the comments.

Nearly 30 Years on Death Row for a Crime He Didn’t Commit – Anti...