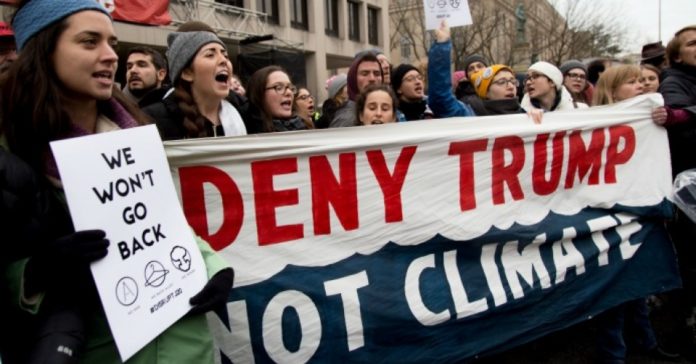 Soon after Donald Trump took his oath as the 45the President of the United States, the new White House web page for his administration went up. Among the key differences from the previous administration’s—the lack of any reference to the threat of climate change.

While climate change was listed as a top issue on the Obama White House official site, the new page now lists ‘America First Energy Plan’ as among the top six issues.

The new page states: “For too long, we’ve been held back by burdensome regulations on our energy industry. President Trump is committed to eliminating harmful and unnecessary policies such as the Climate Action Plan and the Waters of the U.S. rule” That is the only use of “climate” on the page.

Screenshot from the new Trump administration’s White House siteThe Climate Action Plan refers to Obama-era climate regulations, and the Waters of the U.S. rule, as the Washington Postexplains, “is an EPA action to protect not only the nation’s largest waterways but smaller tributaries that critics think should fall under the jurisdiction of states rather than the federal government,” a rollback of which could “end up benefiting some Trump-related businesses.”

The “energy plan” page adds that the new administration “will embrace the shale oil and gas revolution” and is “committed to clean coal technology,” referring to carbon capture and storage—a costly technological process that has so far proven a failure.

The page adds: “President Trump will refocus the EPA on its essential mission of protecting our air and water”—though it stands to be “every polluter’s ally” if Trump’s pick to head the agency, Scott Pruitt, is confirmed.

The Obama White House site, in contrast, listed climate change as a top issue, stating: “President Obama believes that no challenge poses a greater threat to our children, our planet, and future generations than climate change.”

Addressing that magnitude, Michael Brune, executive director of the Sierra Club, said, “Minutes after he was sworn in, any illusion that Trump would act in the best interests of families in this country as President were wiped away by a statement of priorities that constitute an historic mistake on one of the key crises facing our planet and an assault on public health.”

Rather than a plan, Brune said it’s a “polluter wishlist that will make our air and water dirtier, our climate and international relations more unstable, and our kids sicker.”

At the same time, the pledges for more fossil fuel extraction are not at all surprising, said 350.org executive director May Boeve. “Trump’s energy plan is par for the course of the President’s climate denial, but it’s nonetheless alarming for the movement to keep fossil fuels in the ground.”

“Fulfilling this plan would not only set back years of progress we’ve made towards protecting the climate, but would undoubtedly worsen the devastating impacts of the climate crisis, from rising sea levels to extreme weather. This is not a plan for a brighter future—it’s a direct obstacle to a livable future, and we will do everything we can to resist it,” she said.

Raped And Murdered By Her Colleagues On A Military Base In Iraq – Anti...