Home News Trump Administration States Nothing is off the Table in Reinvading Iraq for... 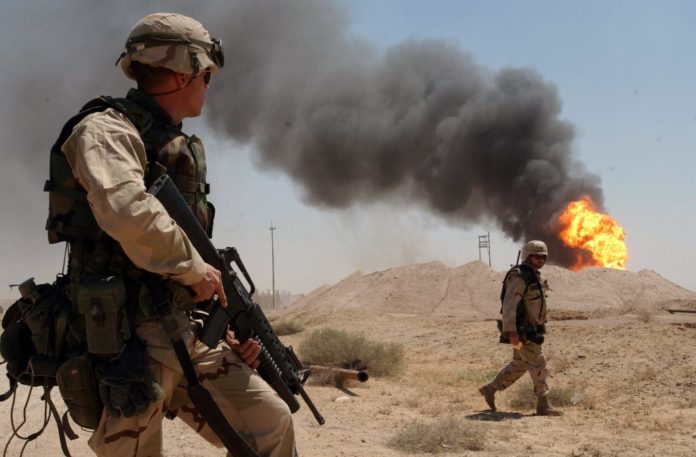 As reported earlier, President Trump laid out his desire for a reinvasion of Iraq in order to steal their oil, outrageously stating “we should have kept the oil” and “maybe we’ll have another chance”.

It should be noted that invading another country to take their natural resources is considered a war crime under the Geneva Convention. This action would also be in violation of multiple international agreements, including the Hague Conventions of 1899 and 1907. Do you think Trump knows this? And since Trump made these statements in his first speech, during his first full day in office, does this mean another Iraq War is one of his top priorities?

At today’s press briefing, as seen in the video below, White House press secretary Sean Spicer was asked, “When he was at the CIA on Saturday, he was talking about the U.S. not taking oil during the Iraq War and he said that there could be another chance for that. What did he mean when he said that?”

Sean Spicer replied, “Well I think what the President has been very clear about in foreign policy is too often the United States is going in with a lot of money, a lot of manpower, and in many cases losing both loss of life and we want to make sure our interests are protected. So if we’re going into a country for a cause, I think he wants to make sure America’s getting something out of it for the commitment and the sacrifice we’re making.”

The reporter responds, “Was he foreshadowing upcoming action by saying there’s another chance?”

Sean Spicer answers, “I don’t think, no, I think he’s been very clear from throughout the campaign that he is committed to making sure America, the American people, the American taxpayer, sees some benefit and ensure that our interests overseas are not just sending blank checks. That we’re doing something that either protects America or is in our economic interests.”

Later on in the briefing, he was asked about the issue a second time, “Can you unequivocally state that this administration will not send more troops into Iraq to, as the President has put it, ‘Take the oil.’”

Sean Spicer replied, “I’m not going to talk about what we may or may not do. I think the President has been very clear that he doesn’t telegraph forward what taking options off the table. That’s not a good negotiating skill. That’s not how he works. The reason he’s been successful at negotiating is because he does it in a way that doesn’t telegraph to people what he’s going to take on or off the table.”

Is the Trump administration actually planning to invade Iraq again, wanting to “make sure America’s getting something out of it”?

Let us know your thoughts in the comments below and on Facebook.

More Than 70 Water Protectors Arrested At DAPL For STILL Trying To Save Something...

Unbelievable Police Memo Tells You All You Need to Know About Cops – Anti...

Dems Accused of Being Too Soft on Trump – Anti Media News