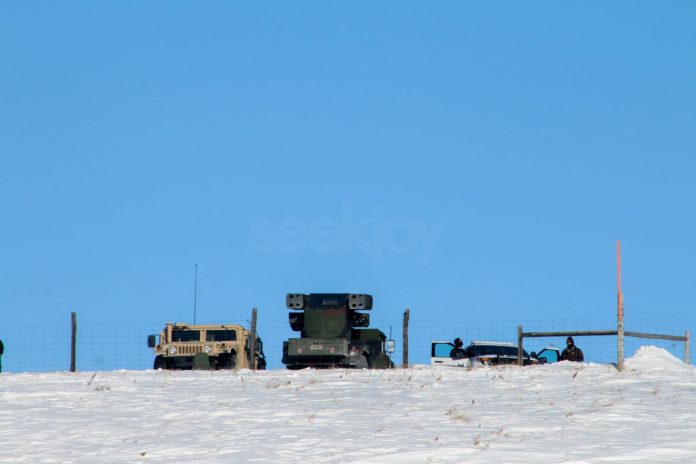 Authorities in North Dakota have confirmed the presence of an Avenger Air Defense System near the Standing Rock Sioux Reservation. According to Morton County Sheriff Kyle Kirchmeier, the system is not loaded with “munitions.” Observers say it is pointed in the direction of the #NoDAPL encampment. Photo: seekjoy

Oil is already going into the Dakota Access Pipeline even though the final portion of the controversial project remains in limbo.In a sworn declaration filed in federal court, a top Dakota Access executive did not detail exactly where the oil has been placed. But vice president Joey Mahmoud said it was near Lake Oahe in North Dakota.”Crude oil has been placed in a portion of the pipeline leading up to Lake Oahe in anticipation of completing the pipeline and commencing full operation,” Mahmoud said.Additionally, Mahmoud said “entry and exit holes” have already been created on both sides of Lake Oahe. A “pilot hole” for a drill that will go under the Missouri River also has been “initiated and executed” up until property managed by the U.S. Army Corps of Engineers, he told the court.The pilot hole would then be used to lay the final portion of the 1,172-mile pipeline at the site, located less than a half-mile from the home of the Standing Rock Sioux Tribe, whose fight against the project has drawn support from around the world.The declaration confirms observations made on the ground by residents of the #NoDAPL encampment near Lake Oahe. For months they have documented the firm’s construction activities at the drill pad for the final portion of the pipeline.

Fusion Media Network on Facebook: ‘They’re shooting us in the back while we’re heading out’

But authorities in North Dakota have erected a blockade and have stationed armed officers to prevent anyone from getting near the site. Despite the obstacles, dozens took part in a prayer march to the drill site on Monday — a federal holiday observed in honor of the late civil rights activist Martin Luther King Jr. — and were met with tear gas, pepper spray and other less-lethal weapons, activists and organizers said.“In Standing Rock, we came together to honor Martin Luther King, a man who stood up for injustice, and we were attacked,” said LaDonna Brave Bull Allard, a Standing Rock citizen who founded the Sacred Stone Camp, the original #NoDAPL encampment. “We came to stand in prayer, and we were attacked. Please pray for the water protectors.”According to the Morton County Sheriff’s Department, activists came within “700 feet” of the drill pad. Some 14 people were arrested after they allegedly refused orders to back away from a bridge that has been the site of several clashes.”Less than lethal weapons were used when the protesters were given multiple orders and warnings to move back from the bridge,” the department said in a press release on Tuesday.Additionally, the department confirmed the presence of an Avenger Air Defense System near Standing Rock. The system is maintained by the North Dakota National Guard, according to Sheriff Kyle Kirchmeier, and can be used to shoot down drones, missiles and other objects.However, Kirchmeier said the Avenger is not armed with “munitions” and is only in place as an “observation” tool.
Morton County North Dakota on YouTube: Protesters Breach Security Fence near DAPL Worksite

Several activists posted photos of the system on social media this week in shock of its presence there. According to observers, it is pointed in the direction of the encampment, where about 1,000 remain despite harsh winter conditions.As the prayer march took place on Monday, the wealthy backers of the pipeline were asking a federal judge to stop an additional review of their costly project. At issue is a government notice that announces an environmental impact statement for the crossing at Lake Oahe.The last-minute “emergency” filing prompted Judge James E. Boasberg to host a private conference call on Tuesday afternoon. He resisted the notion of blocking the notice because the Federal Register — an official journal of the government — was already being compiled in preparation for publication on Wednesday, according to a person familiar with the call.But even though the notice appeared as anticipated, Boasberg agreed to convene a public hearing at 3pm Eastern on Wednesday afternoon to hear from Dakota Access. Attorneys for the Standing Rock Sioux Tribe and the Cheyenne River Sioux Tribe are expected to participate by phone but not in person due to the last-minute nature of the proceeding, just two days before Republican president-elect Donald Trump takes office.Trump supports completion of the pipeline, according to his greatagain.gov transition. His Cabinet includes former Texas governor Rick Perry (R), who up until December 31 was paid to sit on the boards of both Energy Transfer Partners and Sunoco Logistics Partners, two firms that are financing and constructing the pipeline.Perry has vowed to divest from the firms and stay away from matters affecting Dakota Access for at least two years. He is going before the Senate Committee on Energy and Natural Resources for his confirmation hearing at 9:30am Eastern on January 19.Federal Register Notice:
Notice of Intent To Prepare an Environmental Impact Statement in Connection With Dakota Access, LLC’s Request for an Easement To Cross Lake Oahe, North Dakota (January 18, 2017)Dakota Access Pipeline Injunction Documents:
Motion to Stop Notice of EIS in Federal Register (January 16, 2017)
Memorandum of Law (January 16, 2017)
Declaration and Exhibits (January 16, 2017)
Notice of Supplemental Authority (January 17, 2017)