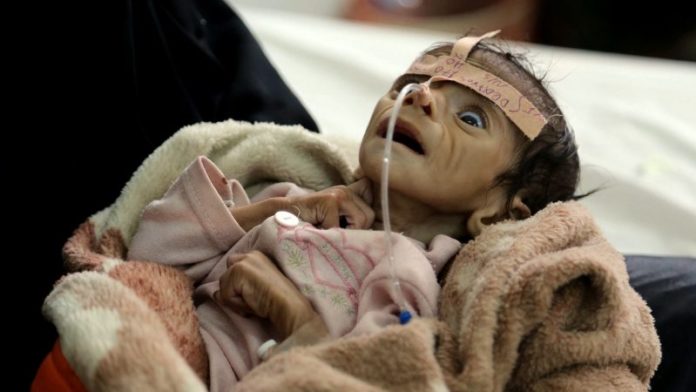 MINNEAPOLIS — Yemen has been devastated by asymmetrical aerial bombardment by a Saudi-led coalition, and the war on Yemen, along with a Saudi-imposed blockade, is having disastrous impacts on food and water security.

The United Nations reported in October that more than half of Yemen’s 28 million people are short of food. At least 1.5 million children are going hungry in the poorest country on the Arabian Peninsula, including 370,000 who are suffering from malnutrition so severe that it’s weakening their immune systems.

And the Saudi-led attacks continue, striking Yemen’s hospitals, which are running out of medicine. All the while, these attacks have continued to receive backing from the United States and the United Kingdom since they began on March 26, 2015.

Even The New York Times admits that the deadly Saudi project in Yemen couldn’t go on without U.S. support.

But the Obama administration has said that while they may start halting some arms sales to Saudi Arabia, they’ll push ahead with training the Gulf kingdom’s air force to improve targeting.

The people of Yemen are without food, water, medicine, and fuel. The death toll in Yemen is so high that the Red Cross has started donating morgues to hospitals. And if that weren’t enough, the military campaign has not only empowered al-Qaida to step into a vulnerable situation, it’s actually made the group richer, according to Reuters.

Still, the Saudi government continues to block any kind of diplomatic resolution in Yemen. Riyadh even threatened to cut funding to the U.N. over its inclusion on a list of children’s rights offenders, effectively weaponizing humanitarian aid.

Yet the crisis unfolding in Yemen goes routinely under-reported in mainstream media. Hard-hitting coverage is kept to a minimum by those controlling the narrative — namely, outlets loyal to the U.S. and its allies which are enabling these atrocities.

Here to discuss the crisis in Yemen and what this war is really about is Catherine Shakdam, a political analyst, author, and director of programs with the Shafaqna Institute for Middle Eastern Studies. She is also an expert on Yemen. “A Tale Of Grand Resistance: Yemen, The Wahhabi And The House Of Saud,” is her latest book, and in it she explores that real story of resistance against Saudi Arabia’s influence on the impoverished state.

Learn more about fake news and about the forgotten genocide in Yemen on the full episode of the Behind the Headline:

Massachusetts Sheriff Has Offered Free Labor From Inmates To “Build The Wall” For Trump...

Dancing FBI Agent Shoots Man In The Leg After Dropping Gun During Backflip At...