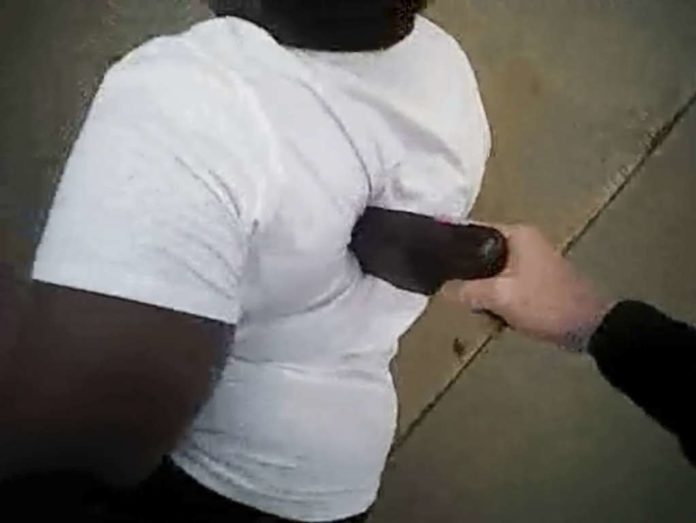 The Fort Worth police department refused to release the body cam footage showing a Texas cop violently arresting a mom and her daughter after they had called him for help, but somebody within the department leaked the video to the family’s lawyer, who then released it to the media.

The video shows Fort Worth police officer William Martin berating, then arresting a woman who originally called police because her neighbor had assaulted her seven-year-old son for littering.

Photography is not a Crime describes the conversation leading up to the violent arrest:

“Why don’t you teach your son not to litter?” Martin asked her after she told him what happened.

“It doesn’t matter if he did or didn’t, it doesn’t give him the right to put his hands on him,” Jacqueline Craig responded.

“Why not?” the cop responded.

When Craig became agitated at the cop’s insensitivity, he asked, “Why are you yelling at me?”

“If you keep yelling at me, you’re going to piss me off, i’m going to take you to jail,” he continued.

Craig’s daughter seemed to feel the situation was going to escalate, so she stepped in to try to calm things down, but that infuriated Martin and he pulled out his taser and threw the mother to the ground while pushing his taser into her back, He then pushed the daughter to the ground and arrested her as well.

The incident occurred on Dec, 21 and Martin’s punishment was a 10 day unpaid suspension, but he is appealing the suspension in an effort to receive pay for the time off work.

Martin’s Attorney says Martin could have been promoted if he took a lesser suspension and gave up his right to appeal, but he chose a 10 day suspension and an appeal instead.

The white police officer accused of using excessive force during his arrest of a black woman and her two daughters could have been promoted to corporal if he would have agreed to a seven-day suspension and waived his right to appeal, according to his attorney and a letter to members of the Fort Worth Police Officers Association from its president.

But because of the excessive-force allegation and the fact that the Tarrant County district attorney’s office has said it plans to present the entire incident to a grand jury, officer William Martin felt he had to choose a 10-day suspension, his attorney, Terry Daffron, said. The decision allows him to appeal the discipline but means he will be bypassed for promotion.

Last week, a group of citizens protested against police in the neighborhood, and three men were openly carrying AK-47s, which is legal in Texas. The men said they were there to protect the neighborhood since police have proven themselves unable to do it.

WATCH: Cop Loses It, Break Girl’s Jaw for Wearing Headphones in a Library

Black Man Found NOT GUILTY BUT He’s Was Jailed For 10 Years Anyway! –...

Court Finds That Approval of Dakota Access Pipeline To be Unlawful – Anti Media...