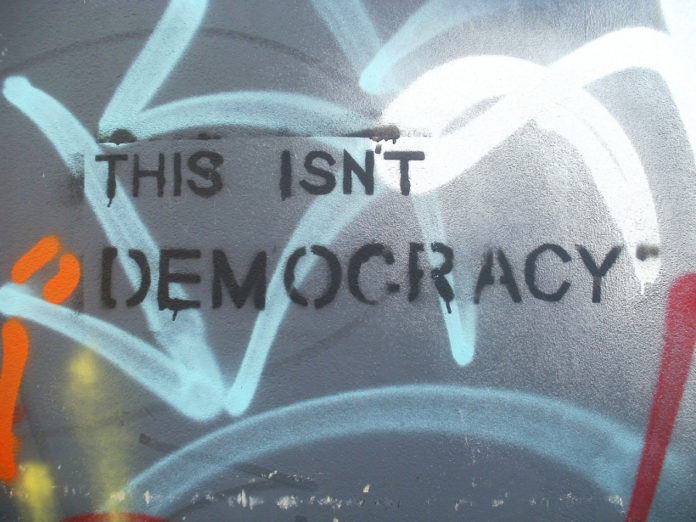 Even the libertarian magazine, The Economist, agrees that America is no longer a full democracy. But was it ever?

Their Democracy Index 2016, published January 25th 2017, de-ranked the United States of America from a ‘full democracy’ to a ‘flawed democracy’ because of declining trust in government and higher income inequality. In the 9 year history of the Index, this is the first time the U.S. was downgraded from the highest rank.

Each of the world’s countries are ranked either full democracy, flawed democracy, hybrid regime, or authoritarian regime. The report determines the ranking of a country based on its electoral process and pluralism, the functioning of its government, political participation, political culture, and civil liberties.

Full Democracies: Countries in which not only basic political freedoms and civil liberties are respected, but also tend to be underpinned by a political culture conducive to the flourishing of democracy. The functioning of government is satisfactory. Media are independent and diverse. There is an effective system of checks and balances. The judiciary is independent and judicial decisions are enforced. There are only limited problems in the functioning of democracies.

Flawed Democracies: These countries also have free and fair elections and, even if there are problems (such as infringements on media freedom), basic civil liberties are respected. However, there are significant weaknesses in other aspects of democracy, including problems in governance, an underdeveloped political culture and low levels of political participation.

Hybrid Regimes: Elections have substantial irregularities that often prevent them from being both free and fair. Government pressure on opposition parties and candidates may be common. Serious weaknesses are more prevalent than in flawed democracies—in political culture, functioning of government and political participation. Corruption tends to be widespread and the rule of law is weak. Civil society is weak. Typically, there is harassment of and pressure on journalists, and the judiciary is not independent.Authoritarian regimes: In these states, state political pluralism is absent or heavily circumscribed. Many countries in this category are outright dictatorships. Some formal institutions of democracy may exist, but these have little substance. Elections, if they do occur, are not free and fair. There is

Authoritarian Regimes: In these states, state political pluralism is absent or heavily circumscribed. Many countries in this category are outright dictatorships. Some formal institutions of democracy may exist, but these have little substance. Elections, if they do occur, are not free and fair. There is disregard for abuses and infringements of civil liberties. Media are typically stateowned or controlled by groups connected to the ruling regime. There is repression of criticism of the government and pervasive censorship. There is no independent judiciary.

For the United States, the report states:

The decline in the US democracy score reflects an erosion of confidence in government and public institutions over many years. According to the Pew Research Centre, public trust in government has been on a steady downward trend since shortly after the September 11th attacks in 2001 (see Box: A trust deficit is undermining democracy, page 14). Donald Trump won the November 2016 presidential election by exploiting this trust deficit and tapping into Americans’ anger and frustration with the functioning of their democratic institutions and representatives.

There are several reasons for this decline in popular confidence in public institutions. Major political events over many decades have damaged confidence: the Vietnam War, the Watergate scandal, the Iraq wars, the financial crisis in 2008-09 and repeated federal government shutdowns. The Economist Intelligence Unit believes that income inequality has also been a key underlying factor. Income inequality is higher in the US than in other rich countries, and it has worsened since the financial crisis. Studies show that higher income inequality reduces trust in others and social capital—this is linked to a notion of fairness. An IMF study finds that income inequality at the bottom of the distribution in the US is particularly important—economically vulnerable and less educated people are more likely to distrust each other. It is no surprise that poorer and less educated voters were attracted by the candidacy of Mr Trump.

Are American Voters Actually Just Stupid? A New Poll Suggests The Answer May Be...

US Ally, Saudi Arabia To Behead Man For Not Believing In God — US...