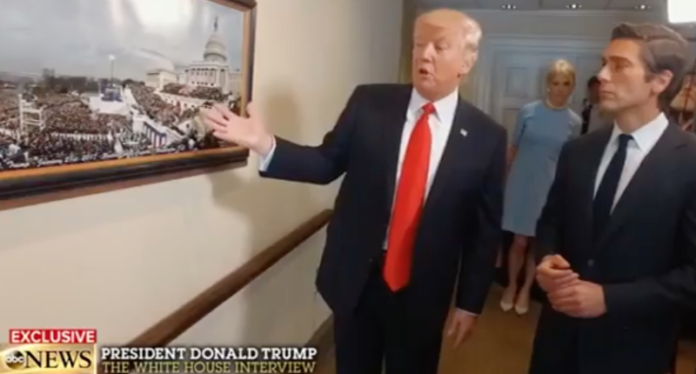 President Donald Trump, a famous narcissist, concluded his first formal interview at the White House by bragging about several photos of his inauguration crowd, and again presenting the alternative fact that his “audience was the biggest ever.”

Elizabeth Preza of Raw Story reported that towards the end of his interview with ABC’s David Muir, Trump showed the reporter a wall of photos from his inauguration, including one of himself with former president Barack Obama and one of daughter Ivanka Trump dancing at an inaugural ball with husband—and top Trump advisor—Jared Kushner.

According to Muir, after the president showed a couple more photos, and just before the crew turned to leave, the president told ABC he wanted to show “just one more image.”

Trump just had to flex his vanity one last time and defend his crowd size.

“One thing this shows is just how far over they go here,” Trump told Muir, gesturing to a large panorama image taken from the side of the crowd. “Look, look how far this is. This goes all the way down here, all the way down—nobody sees that, you don’t see that in the pictures.”

“But when you look at this tremendous sea of love—I call it a sea of love—it’s really something special,” Trump added.

“Many of these people were the forgotten men and women … and they loved what I had to say,” the president concluded.

Sean Spicer, Trump’s Press Secretary, even chose to lie to reporters about the crowd size in his first press conference. Then Kellyanne Conway defended the lies as well and formally introduced us to the Trump administration’s idea of “alternative facts.”

The New Y0rk Times posted an image of the two inaugurations side by side. Both photos were taken 45 minutes before the respective presidents

Check out the interview below:

Woman And Her Two Children Were Detained At Dulles Airport For 20 Hours Without...

The Top Investors for Both Facebook and Monsanto are Virtually Identical – Anti Media...

[Video] Man Explodes At Cop For Pointing a Gun at His Face For Failure...