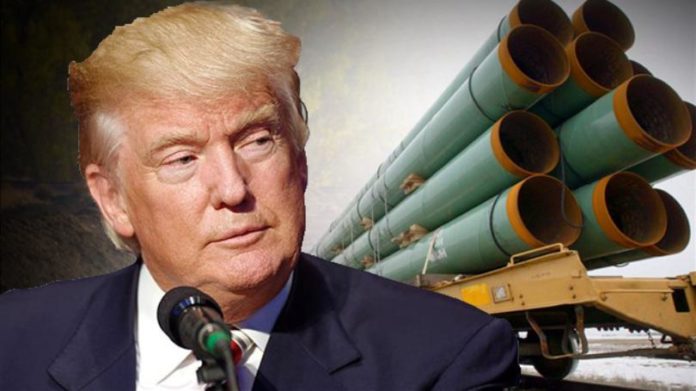 The Standing Rock Sioux tribe is standing up to Donald Trump and his violation of the law. Donald Trump signed an executive order this morning that allows the construction of the Dakota Access pipeline.

“Creating a second Flint does not make America great again,” he added.

The tribe has feared that the pipeline would contaminate their drinking water and destroy sacred sites. Ron His Horse is Thunder, a member of the Hunkpapa-Lakota Oyate tribe, said he feared the pipeline corporation, with the support of Trump, could eventually push forward.

“It’ll slow down the executive order, but it’s not going to stop it,” he said. “It takes us back to where we were when the whole protest started.”

Linda Black Elk, a member of the Catawba Nation who works with the Standing Rock Medic & Healer Council, said “We can’t back down now. We have to continue to stand to protect the water for future generations. I’m not scared for myself, but I admit I am frightened for the future.”

Xhopakelxhit, who is a member of the Red Warrior camp, which organized direct actions against the pipeline, said “If you want to stand with Standing Rock, this is the time people should be there. The people still at camp are requesting help, more bodies, people who are willing to actually make a stand with them, because it’s the most dire need.”

On of the members heard the news about the pipelines on a particularly sad day. Troy Fairbanks, The sixth-generation grandson of Sitting Bull, was preparing to attend the funeral of his daughter when he spoke with the Guardian.

“You can’t drink oil. It’s so sad,” he said. “Have we as Native people ever been given a fair shake?” he asked. “Nah. But this time, the whole world is watching.”

Uber Bans Racist For Life After She Threatens To Falsely Accuse Driver Of Rape...

Nazi-Era Snapshots Show How History Is Repeating Itself In The Trump Era – Anti...

New Jersey Governor Refuses To Ban Child Marriage Because ‘It Would Conflict With Religious...