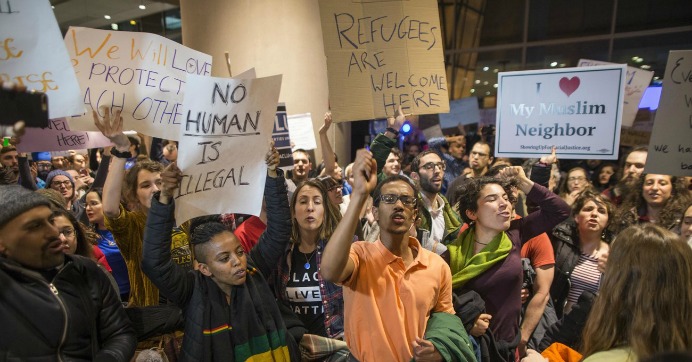 As Bloomberg reported Saturday, the list of banned countries excludes those where Trump has business ties

“I hope Trump enjoys losing. He’s going to lose so much we’re going to get sick and tired of his losing,” ACLU national political director Faiz Shakir told Yahoo News shortly after the ruling.

The ACLU and other activist groups filed a class action lawsuit on behalf of two Iraqis who were held at JFK upon landing. Protests erupted at the airport Saturday as news of the executive order’s immediate impact spread.

The class action lawsuit sought an immediate injunction barring the Trump administration from blocking immigrants based on the executive order. It argued that the order violates a 1965 law that banned discrimination in immigration based on national origin. According to a copy of the court decision from Judge Ann Donnelly, it will stop officials from removing individuals with approved refugee applications, holders of valid visas, and people from the affected countries who have been authorized to enter—pending completion of a hearing on the matter in court. Donnelly also wrote that the lawsuit would have a “strong likelihood of success.”

In her ruling for the Eastern District of New York, Donnelly wrote, “there is imminent danger that, absent the stay of removal, there will be substantial and irreparable injury to refugees, visa-holders, and other individuals from nations subject” to Trump’s ban.

The order will last at least until a hearing scheduled for February 21.

“Clearly the judge understood the possibility for irreparable harm to hundreds of immigrants and lawful visitors to this country,” ACLU executive director Anthony D. Romero said in a statement.  “Our courts today worked as they should as bulwarks against government abuse or unconstitutional policies and orders. On week one, Donald Trump suffered his first loss in court.”

Trump’s order bans refugees from Syria indefinitely and puts a 90-day hold on travelers from Iran, Iraq, Sudan, Somalia, Libya, and Yemen. Refugees who were in the air when the order was signed were detained when they landed.

As Bloomberg reported Saturday, the list of banned countries excludes those where Trump has business ties.

Foreign travelers from those nations, including green card holders, were detained all over the country, prompting massive protests at airports in Boston, Chicago, Dallas, Denver, Los Angeles, San Francisco, Seattle, and outside of Washington, D.C.