Home News Ex-Christian From Duggar Cult Explains Why Pence, Not Trump, Is The Real... 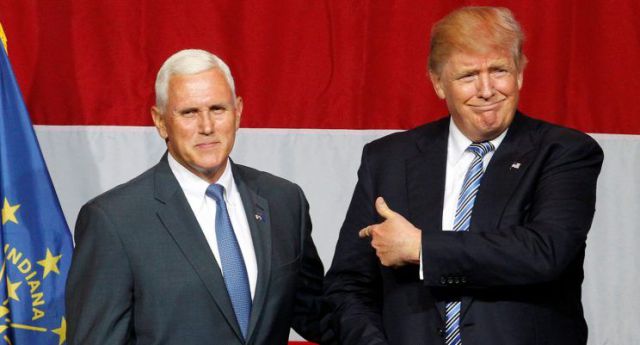 The insider says that Trump is no more than than a pawn that will do whatever he is told by Pence and the Right as long as he thinks he has power. And there is an army of home-schooled right-winged Christian extremists poised to take over.

Evangelical conservatives have been plotting their takeover of the U.S. government for nearly 50 years. The rise of Donald Trump and his evangelical minion, Mike Pence, has finally set up “the tragedy playing out right now.”

Travis Gettys of Raw Story reports Kieryn Darkwater is a transgender former evangelical “Christofascist” who grew up in the Quiverfull movement and uses “they” as a personal pronoun, wrote about their experience as a homeschooled right-wing political activist for the website Autostraddle.

“I watched the Tea Party takeover and was surprised no one saw it coming,” Darkwater wrote. “After all, this was part of the plan. Trump being elected is also part of the plan, although not Trump specifically; the true goal is Pence.”

Evangelical conservatives started taking over local Republican groups in the 1970s and setting up right-wing advocacy groups to push their agenda into the mainstream — which, of course, is the standard form political activism — while all along training their children in home schools and church groups to fight in the “culture wars.”

“It’s a loose and ambiguous term that basically means anything or anyone that doesn’t align with this very specific view of Christianity must not be allowed to continue,” Darkwater wrote.

The group is actively working to remove constitutional rights for non white Christians.

Gettys reported, “The Christian right hopes to overturn court decisions protecting reproductive rights and non-discrimination on race, and Darkwater warned that these religious extremists intend to amend the U.S. Constitution to legalize discrimination against women, people of color and LGBT people.”

“The only way to do this is to infiltrate the government,” Darkwater wrote, recalling the training and activism they took part in as a teenager.

“We were sneaky and polite Trojan horses,” Darkwater wrote. “We had an agenda. Yes, even as 15-year-olds.”

Right-wing Christians have wanted someone like Pence in the White House for years, but a hardline religious conservative hasn’t even been able to win the GOP primary — until Trump emerged as a blank slate with no real principles beyond his own self-aggrandizement, said Gettys.

“They know Trump is easily manipulated and will change his mind with the wind if it makes him feel more powerful and famous,” Darkwater wrote. “Trump couldn’t care less about policy, a fact he’s made quite obvious. The Right has given a tyrant power and fame; he will do whatever they want him to do in order to keep it.”

With Trump apparently willing to sign anything Pence and congressional Republicans hand him, Darkwater wrote, right-wing Christians see an opportunity to finally take over the U.S. government with an army of homeschooled religious extremists.

“Those of us who didn’t leave the far Right are being elected to federal positions or are taking over states and cities,” Darkwater wrote. “With Pence in office, even the reasonable-seeming incumbents – who have been and are still at the mercy of the Tea Party – are growing more bold in their attempts to further the Christofascist agenda: To Take Back The Country For Christ.”

“They will not be won over with sit-downs and respectability politics. This kind of dogma cannot be reasoned with; it must be fought against. Trying to convince them to come to the other side is a waste of time unless they’ve already started on that journey themselves. The ones in power, actively harming our lives, are past this point. We can only fight back,” says Darkwater