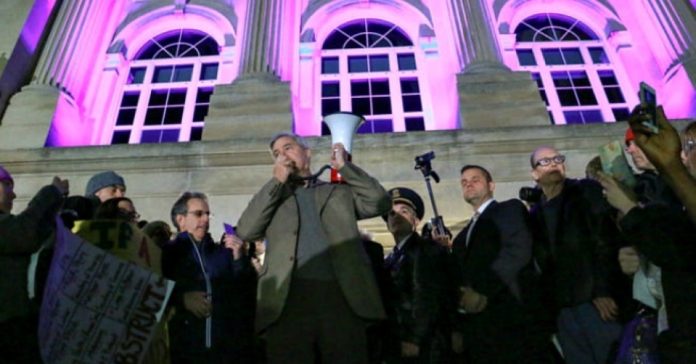 An event hosted by Sen. Sheldon Whitehouse was overwhelmed by Rhode Island residents angry over his vote for CIA director Mike Pompeo

Angry Rhode Island voters overwhelmed a community dinner hosted by Sen. Sheldon Whitehouse on Sunday evening, demanding an explanation as to why the Democratic lawmaker was not doing enough to resist U.S. President Donald Trump.

Specifically, the crowd took issue with the fact that Whitehouse was one of 14 Democrats who voted last week to confirm Rep. Mike Pompeo (R-Kan.) to head the Central Intelligence Agency (CIA), illustrating the backlash likely to befall other Democratic lawmakers who are similarly failing to challenge Trump and his nominees.

In a Facebook call to action, protest organizers blasted Whitehouse and fellow Rhode Island lawmaker Sen. Jack Reed for breaking “with the majority of their Democratic colleagues to vote in support of Trump’s frightening pick for CIA director,” who they described as “a Tea Party congressman who has supported torture and has a disturbing history of anti-Muslim rhetoric and climate change denial.”

“Whitehouse should be leading the resistance to Trump’s dangerous agenda,” the statement continued. “And we, the people, need to draw a line in the sand and make sure that our Senators make the right, necessary choices moving forward. With so many important battles ahead, we can’t be pushed back so easily.”

It appears that hundreds answered that call.

According to the Providence Journal, “The event also ended up happening a few hours after a hastily assembled rally protesting Trump’s immigration moves, at which Whitehouse was a speaker. Hundreds who attended the rally then walked 1.5 miles to the [Providence middle school], but the crowd was so large it could not fit inside the auditorium.”

In a YouTube video posted by the group Resist Hate RI, the wall-to-wall crowd is seen chanting “Just Say No!” and “Obstruct!” while one attendee tells Whitehouse: “If you don’t agree with this candidate, vote against him.”

In response, Whitehouse told those inside, “You are entitled to an explanation of why I have voted for some of the defense nominees and I will concede right off the bat that I may have been wrong.”

Afterwards, Whitehouse used a bullhorn to addressed the angry crowd outside, who wanted to know where he stands on Trump’s remaining nominees. To loud cheers, Whitehouse ticked off those he would not be voting for: “Education, no. State, no. Attorney general, no. EPA director, really big no. Treasury, no. Labor, no.”

“But much to the chagrin of several particularly vocal attendees, he could not commit to obstructing Trump or his nominees at every given opportunity,” the Brown Daily Heraldobserved.

One voice from the crowd asked Whitehouse, “Can you take a message to Democratic legislators? The majority of the American people are behind them and we need them to lead bravely.”

Whitehouse is just the latest Democratic lawmaker to be challenged for supporting Trump’s agenda.

As Intercept report Lee Fang pointed out on Monday, “Activists around the country have increasingly called on Democratic lawmakers to do more to stop Trump’s nominations. Last Tuesday, more than 100 demonstrators picketed Sen. Mark Warner’s office in northern Virginia to protest the senator’s support for Pompeo. Sen. Bob Casey, D-Pa., said his office received more than 50,000 emails and letters urging him to oppose the nomination of [Betsy] DeVos.”

Trump supporter invited on stage was ‘PLANTED in the crowd by the PRESIDENT’ –...