Home Courts Gorsuch is Yet Another Multimillionaire – Anti Media News 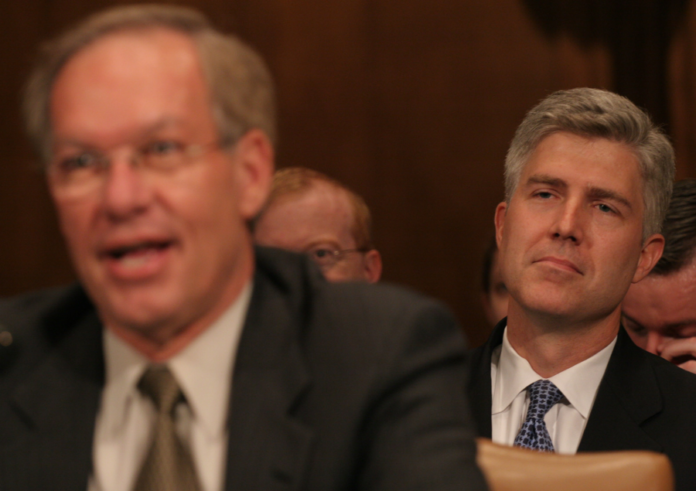 It’s official: If Neil Gorsuch, President Trump’s choice to replace Antonin Scalia on the Supreme Court, is confirmed by the Senate, we’ll have yet another millionaire on the court of last resort.

The 10th Circuit Court of Appeals judge is a respected jurist and elegant writer who’s considered similar to the late justice whose seat he may be filling in his originalist take on the Constitution. Gorsuch is sometimes thought of as Scalia without the bite: Scalia could be scathing, in writing and from the bench.

And like Scalia, only more so, Gorsuch is quite wealthy. According to his 2015 financial disclosure statement — the most recent available — Gorsuch had an estimated net worth of somewhere between $3.2 million and $7.3 million, not counting a few things like the Denver-area home he occupies. (Judges and others — like members of Congress — who file financial disclosure forms aren’t required to include “any mortgage, equity loan, or line of credit secured by a personal residence, vehicle, boat, or motor home.” And those can be quite some valuable assets to leave out.)

All the justices except Anthony Kennedy and Clarence Thomas have an average estimated net worth of more than $1.5 million.

Gorsuch’s investments include a long list of mutual funds, IRAs and other vehicles that invest in the stock market, as well as a number of bonds. He accrued anywhere from $140,000 to $390,000 in passive income from his investments in 2015.

Gorsuch — at 49, a youngster by the standards of the Supreme Court — also was a member of a limited liability company that owns mountain property called the Walden Group, as well as an adjunct professor at University of Colorado Law School, which paid him $26,000.

He brought in a meager $304.94 in royalties from Princeton University Press for his uplifting 2006 book, The Future of Assisted Suicide and Euthanasia (hint: He’s not a fan), and $5,000 from West Publishing  for The Law of Judicial Precedent(which he coauthored with William Pryor Jr., who reportedly also made the short list for the slot on the high court).

Should Gorsuch be confirmed, he’ll be getting a decent raise: Associate justices earn $251,800, a nice step up from the $217,600 he makes on the appeals court.

It’s unlikely he’ll use any of that to make political contributions; that’s rare in the federal judiciary. But before his appointment, Gorsuch dabbled a little, doling out a total of $2,800 to George W. Bush (who put him on the appellate court in 2006), Sen. John McCain (R-Ariz.) and Sen. Bill Frist (R-Tenn.).

There were no gifts to Barack Obama’s senatorial or presidential campaigns — though Gorsuch and Obama were classmates at Harvard Law. Another member of that class: Norm Eisen, Obama’s former ethics czar, who has been vociferously critical of conflicts of interest in the Trump administration.

Both sides are arming for a battle royale, with Democrats feeling aggrieved perhaps not so much by the particular name in front of them as by the fact that Republicans took the unprecedented step of refusing to even consider Obama’s nominee for Scalia’s seat, appellate court judge Merrick Garland, even though Obama had nearly a year left in his term when Scalia passed away.

Gorsuch and the Trump administration will get assistance from a host of conservative groups that plan to run ads to stir up public pressure. Chief among them: the Judicial Crisis Network, a 501(c)(4) nonprofit that doesn’t reveal its donors but seems to have plenty of money to throw around these days. Last year it spent more than $7 million, by its own count, encouraging GOP senators to stand fast against filling Scalia’s seat in a campaign it dubbed “Let the People Decide.” It has pledged $10 million to TV ads and other activities to see Trump’s nominee confirmed, in part by targeting Democrats who are up for re-election in 2018.

JCN likely will have little trouble raising that money. Started during George W. Bush’s presidency with help from the Koch brothers’ network of donors, the group — then called the Judicial Confirmation Network — originally beat the drum in favor of Bush’s Supreme Court nominees. It changed name and purpose after President Obama was elected — fighting his nominees, investing millions in state judicial elections as well as attorneys general races and funneling more to groups working toward the same goals — like Wisconsin Club for Growth, American Future Fund, the Republican Attorneys General Association and the Republican State Leadership Committee.

We may never know who, specifically, is funding JCN’s efforts currently. In previous years it has received much of its budget from another dark money group, adding another cushion of anonymity for donors. In addition, “social welfare” nonprofits like JCN file their annual IRS Form 990s up to 11 months after the end of their fiscal year — in other words, not even close to real time — so any information that might be gleaned from the documents is stale.

Hardiman, a judge on the 3rd Circuit Court of Appeals based in Pittsburgh and thus a colleague of Judge Maryanne Trump Barry, the president’s sister, is by far the wealthiest of the three who appeared to be finalists: He was worth between $8.3 million and a whopping $22.2 million in 2015, with a filing triple the size of the others’. (Judges report their investments in ranges, so we do not have an exact number for net worth.) That year Hardiman had at least $330,000, and as much as $2.4 million, in passive income from his investments.

His highest-value assets came via a real estate partnership. Hardiman brought in around $1.4 million to $7.4 million from various real estate development ventures in Pennsylvania.

Hardman and his wife, Lori, also were donors before he took his seat on the bench, giving $19,200, most of it to Republican politicians. Pennsylvanians garnered the most: Sens. Arlen Specter (at the time a Republican) and Rick Santorum, and Rep. Melissa Hart. Hardiman also made a lone Democratic contribution to Richard Cordray — now head of the Consumer Financial Protection Bureau — for $300 in 1992 when he ran and lost the race for Congress representing Ohio.

The 2007 George W. Bush appointee appeared to be the only name on the short list who directly owned stocks, meaning he’d have needed to recuse himself from cases dealing with companies like Apple, Duke Energy, General Electric, General Motors and Time Warner, or divest those holdings.

The other name in the running until the last couple of days was William Pryor Jr., who has served on the 11th Circuit since 2004, when President Bush used his power to make recess appointments to circumvent a filibuster by Senate Democrats. The Atlanta-based judge was worth between $730,000 and $2 million in 2015; he accrued about $57,000 to $140,000 in passive income in that year.

Teaching at the University of Alabama and Samford University law schools brought in another $19,500 on top of his judicial paycheck, and he got his $5,000 slice from West Publishing Company.

Pryor made just two donations: $1,000 each to Bush and to fellow Alabamian and Trump’s pick for Attorney General, Sen. Jeff Sessions. Sessions is said to have pushed for Trump to nominate Pryor.

Media Blackout on Protests in Mexico Pushing Country to Brink of Revolution – Anti...

Skies To Be Openly Sprayed With Toxic Metals This Weekend, Blocking the Sunlight –...