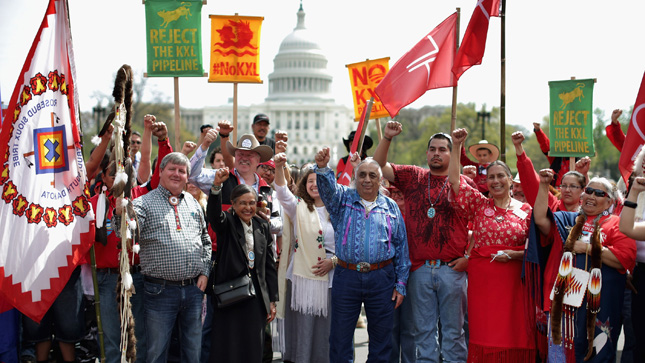 “Donald Trump Has Declared War on Indigenous Nations” “We will set up camps along the KXL route to resist this pipeline.”

The Indigenous Environmental Network today hosted numerous Indigenous people from across the country today in a call with press to outline next steps to fight back against the Keystone XL pipeline following news late last week that Transcanada submitted a new application to revive the pipeline following President Trump’s executive orders on the topic last week.

“Donald Trump has declared war on Indigenous nations across the country. This pipeline runs right through the traditional lands of the great Sioux Nation. Attacks on our lands, sovereignty, and health must stop. We will fight using prayer and non-violent direct action to stop Keystone XL and Dakota Access pipelines, and we will not back down,” said Joye Braun, an organizer from the Cheyenne River Sioux.

Key takeaways from the call included news that Indigenous groups are planning mass mobilization and spiritual camps to resist the Keystone XL pipeline up and down the pipeline route, in addition to reviving the Standing Rock camp.

Also on the call, Indigenous speakers spoke of how this last week’s actions have revived a long history of trauma for Indigenous people at the hands of the US government.

“President Donald Trump has renewed extreme historical trauma for our people — once again undermining our safety and our sovereignty. Trump’s lack of clarity and consultation with our indigenous nations on Keystone XL or the Dakota Access Pipeline is gravely concerning. The United States, and specifically Donald Trump, have violated their own laws in this attack on our nations. We will not give up hope, and we will not stop fighting until Donald Trump backs down on these toxic pipelines,” said Faith Spotted Eagle of the Ihanktonwan Treaty Committee.

“The Keystone XL pipeline is a violation of our treaty rights. My nation is not taking Donald Trump’s new memorandum on Keystone XL lightly — we will fight back through the courts, protests, and any means available and necessary,” concluded Eriel Deranger of the Athabasca Chippewayan First Nation.

Note to press: Indigenous Environmental Network spokespeople are available for interviews across the country. To schedule, please contact Nina Smith at nina@megaphonestrategies.com, 301-717-9006

The Indigenous Environmental Network is an international environmental justice nonprofit that works with tribal grassroots organizations to build the capacity of Indigenous communities. Find out more at: www.ienearth.org

Ex-Mormon Bishop and Convicted Rapist is Described by Judge as ‘a good man’ at...