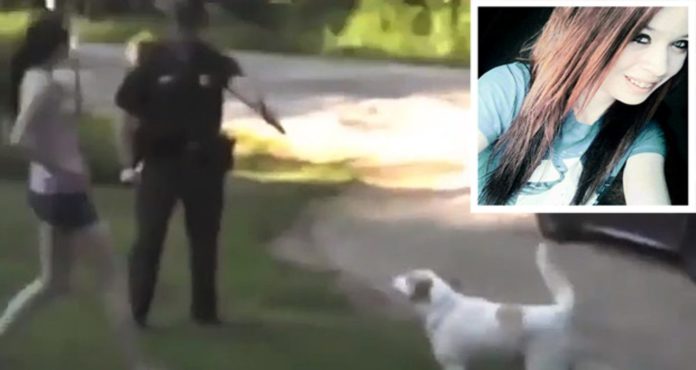 This West Virginia woman who was cleared on obstruction charges after standing between her dog and the cop who wanted to kill it has filed a lawsuit.

PINAC reports that on the details of the case:

May 9, 2015, West Virginia state trooper Seth Cook arrested Tiffanie Hupp, 24, on obstruction charges after she stepped between the trooper and her dog Buddy, who was chained to a tree on her family’s property and wagging his tail when Cook aimed his gun at the dog’s head attempting to shoot it.

Cook testified that he was not in fear for his life, but was only following training that required him to kill all dogs that approach him, even if they are wagging their tails.

The mother of two told Photography is Not a Crime the cops weren’t even called to her family’s property in Parkersburg for a dispute involving a dog.

Instead, they were there to mediate a tiff between her stepfather-in-law and his neighbor.

Hupp was acquitted by a jury on February, 29th, 2016 after her lawyer, David Schels, played a video of the incident taken by her husband Ryan before resting his case.

The video below shows Cook walk on to Hupp’s property, draw his loaded gun and point it at Buddy’s head.

Cook orders Hupp, who was playing with her 3-year-old son Riley, to “control your dog now.”

When she quickly moves between the trooper and Buddy, attempting to protect the dog and her son from being traumatized from witnessing his dog being shot, Cook grabs Hupp, throws her against the ground, pushes her against his police cruiser and arrests her for obstructing an officer.

After arresting her, Cook entered the Hupp’s home without a warrant and confiscated all recording devices the event was potentially captured on.

“After he put me in the patrol car and arrested me, he just walks up to the trailer and up the the phones and, whatever devices were on chargers, he took them,” Hupp told PINAC last March.

“He took my husband’s phone, he took my phone, he took my sister-in-law’s and my son’s tablet. And we don’t use those phones or tablets anymore. If my phone leaves my hands and goes into the hands of a cop, I kinda don’t trust that.”

After almost a month of constant calls to the West Virginia State Police department, they returned her phones.

“Without that video, it’s just my word against a State Trooper. Nobody is going to believe my word over law enforcement,” Hupp said after being acquitted on the obstruction charges.

Her phone was password protected, but the department refused to return it unless she provided them with a password, which means they likely searched her phone without a warrant.

“Talk about being a mouse trap,” Hupp said after learning of the conflict of interest.

Hupp and her family are now seeking restitution for funds so her son Riley, who now suffers from anxiety and emotional distress when in the presence of police, can receive treatment by a mental health professional, according to a press release from the Animal Legal Defense Fund.

What Happens If Your Number is Found In A Drug Dealer’s Phone? – Anti...