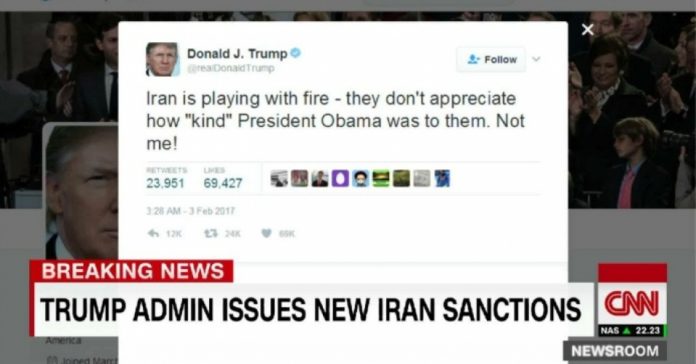 Marx offered that history repeats itself, first as tragedy, then as farce.  A mere two weeks into the reign of a new administration in Washington, it appears the farce has already commenced.

In an eerie parallel to the George W. Bush administration’s fevered fixation on “regime change” in Iraq from its very earliest days, the freshly minted Donald Trump administration has wasted little time in laying the groundwork for a disastrous military confrontation with Iran.

The following day, White House Press Secretary Sean Spicer attempted to further explain Flynn’s “on notice” broadside by carelessly conflating a Saudi naval vessel with an American vessel and Yemeni Houthi rebels with Iranian forces.  According to Spicer, Iran is “on notice” in part because its “additional hostile actions that it took against our Navy vessel.”  Spicer’s confused remark was in reference to an actual Houthi attack on a Saudi ship in the Red Sea, not any Iranian attack on an American vessel.

The new administration’s clear interest in the Saudi-led war in Yemen is telling.  As Dan De Luce and Paul McLeary write in Foreign Policy, “President Donald Trump’s aides see Yemen as an important battleground to signal U.S. resolve against Iran and to break with what they consider the previous administration’s failure to confront Tehran’s growing power in the region. But the tough approach carries the risk of triggering Iranian retaliation against the United States in Iraq and Syria, or even a full-blown war with Iran.”

Seemingly welcoming such risks, the administration continued its series of provocations on Friday, with the administration formally slapping punitive sanctions on Tehran, which the New York Times characterized “as the first in a series of efforts [by Washington] to confront Iran around the globe.”

Announcing the sanctions, Flynn once again indulged in perilous rhetoric by attacking “Iran’s belligerent and lawless behavior.”   As an example, Flynn cited “the abduction of ten of our sailors and two patrol boats in January 2016.”  That would be the case in which the American sailors strayed into Iranian territory and were apprehended and briefly held by Iranian authorities.  The belligerent and lawless behavior in that particular case was certainly not that of the Iranians.

A day prior the announcement of further sanctions, a bipartisan group of twenty-two senators penned a letter urging the Trump administration to take a hard line on Iran.  Among the ten Democratic senators to sign the letter was none other than Virginia Senator Tim Kaine, Hillary Clinton’s vice presidential running mate.

The senators’ letter argued that Iran “must feel sufficient pressure.”  It continued by stating that “we look forward to supporting your Administration’s efforts to hold Iran accountable.”

After campaigning on unilaterally tearing up the Iranian nuclear accord signed between Tehran and the five permanent members of the U.N. Security Council plus Germany, the Trump administration that the ten Democratic senators “look forward to supporting” is unsurprisingly chock full of Iran hawks. In addition to the virulently anti-Iran Flynn, hardliner Mike Pompeo is now leading the CIA, James Mattis is leading the Pentagon, Mike Pence is arguably leading the White House, and presidential advisors Jared Kushner and Steve Bannon are widely seen as Trump’s nefarious puppet masters.

Mattis’ animus towards Iran is particularly notorious. In 2012, then U.S. CENTCOM commander Mattis deemed the three biggest threats to the U.S. to be “Iran, Iran, Iran.”  Remarkably, Mattis has even gone so far as to absurdly tie ISIS to Iran, stating “I consider ISIS nothing more than an excuse for Iran to continue its mischief. Iran is not an enemy of ISIS; they have a lot to gain from the turmoil that ISIS creates.”

Mattis continued: “I would just point out one question for you to look into.  What is the one country in the Middle East that has not been attacked by ISIS? One. That is Iran. That is more than happenstance, I’m sure.”

The fact that Tehran and its proxies are currently engaged in fierce battles against ISIS militias in both Iraq and Syria is immaterial to the secretary.  Mattis evidently sees the sinister hand of the Islamic Republic behind every affront to U.S. military predominance over the American oil depot that is the Middle East.  Such sentiments, of course, hearken back to the days Bush and Cheney frantically sought in vain to link al-Qaeda to Iraq to justify their war.  As one senior Pentagon official forebodingly confided to Politico, Mattis’ obsession with Iran could very well led to such a war.

On cue, speaking this week, Secretary Mattis deemed Iran to be “the single biggest state sponsor of terrorism in the world,” while asserting that its “misconduct and misbehavior” must be addressed.

It’s important to note that even amid all the fervent talk about punishing Iranian “misbehavior,” Iran has in reality thus far adhered to the terms of the landmark nuclear accord so many in Washington appear intent on ripping up.  Buried deep with a Times article one reads that, “The Iranians have largely complied with every provision of the deal, according to the International Atomic Energy Agency, which conducts regular inspections of the nuclear facilities. When small violations have been found, the Iranians have quickly rectified them, including by shipping fuel out of the country.”

But in the alternative reality of Washington, where ISIS and Iran are said to conspire together and Saudi ships are opportunistically passed off as U.S. vessels, Iranian compliance will be taken as only the latest evidence of Iran’s inherently duplicitous nature.  It’s an Alice in Wonderland world.  But as Karl Rove once boasted of the Bush administration, “we create our own reality now.”  It’s an axiom clearly taken to heart by the new Trump regime.

So here we are, nearing the 14th anniversary of the U.S. invasion of Iraq, and once again a fanatical new regime in Washington is beating the drums of war.  Though this time, with a callow reality television actor cast as the commander-in-chief, it feels so much more like farce.

Cops Electrocute Pregnant Teen with 50,000 Volts After She Demands a Warrant to Enter...