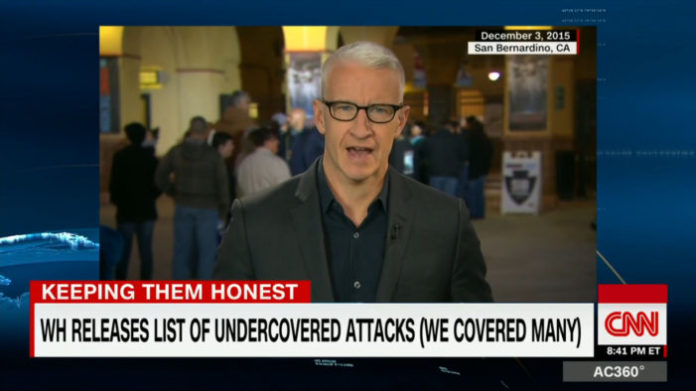 President Donald Trump chose to lie to an audience of military soldiers in Tampa, Florida today when he told them the media is not covering acts of terrorism anymore. He said, “the very very dishonest press doesn’t want to report it.”

The White House released a list of 78 terror attacks the president believes media “downplayed” or did not report at all, even though some of them were plastered all over the media for days. Interestingly, none of the times the U.S. military dropped bombs on civilians made the list, not even the wedding parties that were bombed, or any of the many times Israel bombed Palestinian hospitals.

Anderson Cooper took issue with Trump’s accusation that the news media didn’t cover acts of terrorism and took the personal privilege to show footage of himself covering the acts of terrorism, reported Sarah Burris of Raw Story.

“Not only did we cover many of the attacks on that list, we covered them heavily,” Cooper began. “I know, because I was on the ground reporting a number of them. CNN was on the ground in Ottawa, Canada, when a gunman killed someone at the tomb of the unknown soldier. I was in Orlando, I flew there right after the news broke. December 2015, that was on the list, San Bernardino. I was there, 14 people killed and 21 wounded in coordinated attacks. This was a month after I reported on the carnage in Paris, where terrorists killed 130 people and wounded many others. To be sure, this program did not cover each and every incident on the list, however other programs, as well as CNN International, covered most if not all of them, most of them exhaustively.”

Trump’s true agenda is still hidden concerning why he is so adamant about calling all media networks “fake news” and “very very dishonest.” It is also still hidden why he wants to draw so much attention to terrorist attacks, even lying excessively about the media coverage they receive. It could be that people fall in line easier when they are scared and he is trying to keep people scared and uncertain as Maria Cardona points out.

Political commentator Ryan Lizza wondered why the White House seems so obsessed about getting people to focus on terrorist attacks.

Democratic consultant Maria Cardona speculated that it could be part of Trump’s strategy to gin up fear among Americans about possible terrorist attacks again.

“I think he wants to blame the media or blame the judge to have everybody talking about terrorism so that there is a reason that the judiciary will give him standing to pass what he wants to pass,” Cardona said.

Watch the video clip below:

We can be fairly certain Trump will refuse to admit to his lies and he will continue to point his finger at others when he does something wrong.