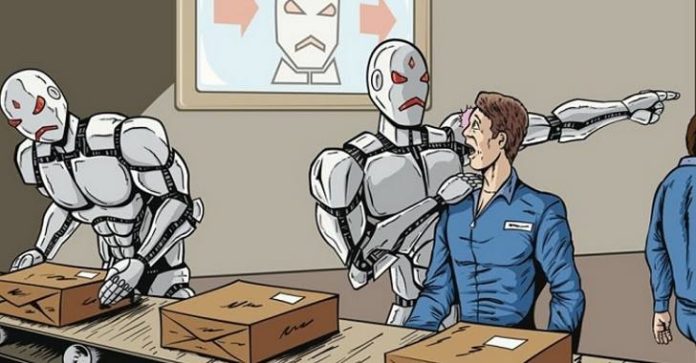 Imagine a 10,000 to 40,000 square foot, two-story supermarket that employs only a few people. The glut of the workforce is robots. A small army of them toils away on the second floor, where they furiously bag items for the customers browsing below. According to a report by the New York Post, this is the prototype of a near-future Amazon supermarket, a colossal version of the new Amazon “Go” convenience store that uses no cashiers or checkouts. And it’s another example of how automation’s already rapid encroachment on the human job market has gone into overdrive.

Amazon CEO Jeff Bezos wants his automated grocery store to feature a ground level where shoppers can touch and physically select items — typical food products that people like to touch, beer, fruit, etc. This floor may also feature a pharmacy, which would be a new but financially promising sector for the company, and human “greeters” who double as shoplifter deterrents.

Some of these stores, Bezos believes, will be able to operate with as few as three human employees and a maximum of ten. They will function mostly as menial clerks, signing people up to Amazon “Fresh,” restocking shelves, managing the drive-thru, and even assisting the robots. One almost gets the impression the store could go completely sans human employees if Amazon didn’t mind the stigma. Perhaps that’s where we’re headed — and sooner rather than later.

The monetary advantage is clear: with a meager payroll and optimized real-estate, the Amazon model stands to generate an operating profit margin of 20 percent. According to the Food Marketing Institute, the industry average is 1.7 percent. If those numbers hold, you can say goodbye to the human grocery clerk.

This isn’t the first attempt at an automated grocery store. In 2015, the group Eater Greater Des Moines began work creating an automated store kiosk. Even as far back as 1937, the completely automated store Keedoozle (as in “key does all”) launched in three locations before failing due to technical difficulties.

With human cashiers already rapidly losing their jobs to automated kiosks in many grocery stores, it seems there has been a steady shift away from human labor in grocery stores. The Amazon robot supermarket model would expedite that shift by replacing most of the clerks with robots.

Amazon deferring to technology over people should come as no surprise to those who have followed the company closely. In 2012, Amazon dropped $775 million acquiring the company Kiva for the purposes of robotic warehouse automation. And, of course, there’s the legendary delivery-by-drone plan — featured in a Super Bowl ad over the weekend — that hovers inexorably in our near future.

Additional reports suggest the Amazon supermarkets may only be available to those with Amazon “Prime” memberships. A source says this restriction may help reduce theft because, “In the view of Amazon, people who can afford Prime memberships aren’t likely to shoplift.”

(Article By Jake Anderson of The Anti Media)

You Might Not Want To, But You Need To See This – Anti Media...

Florida Man Attempts to Burn Down Store to “Do his part for America” Because...