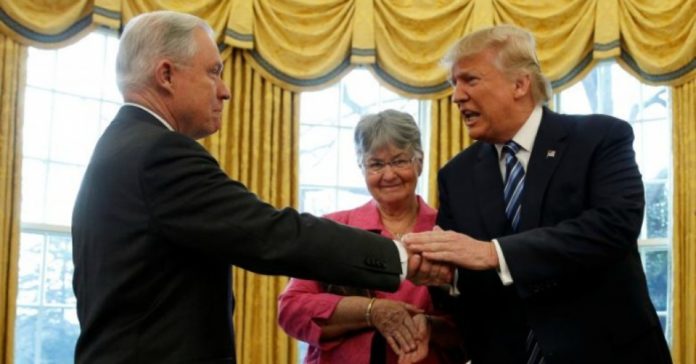 “It’s about immigration, again,” says one commenter of orders signed by President Donald Trump on Thursday

“A new era of justice begins, and it begins right now,” Trump said to conclude prepared remarks at the White House. The orders were signed following Jeff Sessions’ swearing-in as U.S. attorney general.

The White House did not provide the exact language of the executive orders, but Trump said one would “break the back of the criminal cartels that have spread across our nation and are destroying the blood of our youth,” another would create a task force to reduce violent crime, and the last would instruct the Department of Justice—now under Sessions’ command—to come up with a plan to stop violence against law enforcement officers.

As the text of the memoranda trickled out, USA Today reporter Gregory Korte noted that one of the orders links crime with “illegal immigration”—echoing remarks Trump made Wednesday before a law enforcement conference, in which he blamed gang violence in Chicago on undocumented immigrants.

Attorney and immigration reform advocate David Leopold similarly warned that by putting “‘illegal immigration’ on par with drug trafficking and violent crime,” Trump is making “clear he’s about to unleash his deportation force.”

1/On Trump’s EO on crime: The insidiousness is putting illegal #Immigration on par with drug trafficking & violent crime.

2/This is the policy foundation for the priorities laid out in the internal enforcement EO which pretty much targets all 11 million.

3/taken together, these EOs are the justification for the coming Deportation Force.

No immigration priorities. Only chaotic enforcement.

Others expressed concern that the orders would justify a law enforcement crackdown on protesters or minorities.

This is code for arrest more Black people. https://t.co/D8HE73P7HN

Sessions will use this imaginary rise in crime to crack down on protests the same way Trump uses the threat of terrorism to limit Muslims.

Meanwhile, criticism was lobbed against Sessions for parroting Trump’s lies on the U.S. crime rate during his swearing-in speech.

“We have a crime problem,” Sessions said at the White House. “I wish the rise that we’re seeing in crime in America today was some sort of aberration or blip. My best judgment, having been involved in law enforcement for many years, is this is a dangerous permanent trend.”

But according to FBI data, that simply is not the case.

While the reported violent crime rate in the United States rose in 2015 compared to the previous year, it has fallen consistently since the early 1990s.

The president’s description of an increasingly dangerous America feeds into his campaign narrative that the nation simply needs more “law and order” to be safer. He’s argued that police are being mistreated amid a national debate about racial policing after groups like the Black Lives Matter movement demanded police reforms amid a slew of police killings of unarmed black men and women.

“The danger is, as you continue to create this dark view of society,” John Jay College of Criminal Justice professor Dennis Jay Kenney said, “it becomes a self fulfilling prophecy.”

Kenney, who was a police officer in the 1970’s, said Trump’s misleading view on crime and safety is dangerous because it’s more likely to inflate community and police officers’ fears rather than sooth them, which helps to create rifts between the two groups.

“The relationship between the police and community is the single most determinate of police effectiveness,” he said, noting that community-based policing and better integration is what drove crime down to its historic low levels in recent years. Trump and Sessions’ rhetoric—simply getting tougher on crime—won’t stop crime, he said.

The ACLU, which on Wednesday vowed to sue Sessions if he violates the U.S. Constitution, also responded to the orders with skepticism and concern.

“President Trump intends to build task forces to investigate and stop national trends that don’t exist,” said Jeffery Robinson, deputy legal director of the ACLU and director of its Trone Center for Justice and Equality. “We have seen historic lows in the country’s crime rate and a downward trend in killings against police officers since the 1980s. The president not only doesn’t acknowledge these facts about our nation’s safety, he persists in ignoring the all-too-real deaths of black and brown people at the hands of law enforcement.”

Sergeant Sues Police Department Over A Black Cop Depicted As A Monkey In Training...