Home News Black Man “Accidentally” Raped With a Police Baton According To Police –... 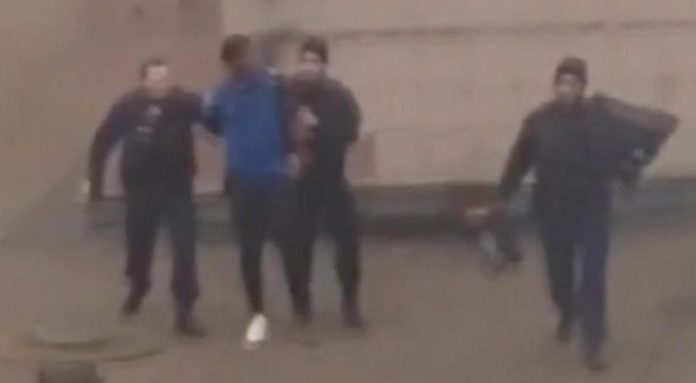 On February 7th Theo made the complaint that he had been sodomized by an officer’s telescopic baton and beaten on his head and genitals.  Theo was injured so brutally that he had to undergo reconstructive surgery for his “severe anal injuries” and is expected to be incapacitated for least three months to heal from the trauma. French Interior Minister Bruno Le Roux released a statement proclaiming: “One officer was charged with aggravated rape and the others with aggravated assault.” A viral video depicting the violence that Theo endured at the hands of police that has been circulating around the internet and has incensed those in his community- prompting many to take to the streets in protest of the unjust discrimination French young people of color face at the hands of police, and particularly those from poorer neighborhoods.

As reported By Charlotte England for the Independent writes:

A lawyer for one of the officer’s suggested his expandable baton slipped into the man’s anus by accident.

The findings of the internal police inquiry were announced as violent protests continued for a sixth night in Paris’ northern suburbs, over the incident involving a man identified only as Théo.

The youth worker suffered such severe injuries to his rectum during an arrest last week in Aulnay-sous-Bois, north of Paris, that he needed major emergency surgery and remains in hospital.

President Francois Hollande visited Théo, who had no police record prior to the incident and was stopped last week for an identity check, in hospital on Tuesday, in a bid to calm tensions on housing estates and deflect criticism that the government has not taken allegations of police brutality seriously.

With Mr Hollande beside his hospital bed, Théo made a televised appeal for his neighbourhood to stay calm and “stay united”. He said he did not want a war on the estate and that he trusted the justice system.

But the finding of the inquiry may now spark more protests.

While Theo made appeals from his hospital bed for peace in his neighborhood, he should not have been the be the one to appease the masses for the injustice done to him. Authorities are more concerned with their image than with giving this young man justice. What should have happened was Mr. Hollande appealing to the youth of Theo’s neighborhood, by pledging that he will work to making the streets safe from violent cops and that justice for Theo will be had.  But instead, Mr. Hollande and law enforcement involved continue to make excuses for the disgraced officers.

Police reviewed a video which reportedly shows an officer “applying a truncheon blow horizontally across the buttocks”. After this Theo’s trousers “slipped down on their own”, a police source told French media.

Investigators said they had taken into account “the questioning of the victim and the (police officers), eyewitness accounts and CCTV recordings” and had concluded that “there are insufficient elements to show that this was a rape”.

However, a magistrate has charged one of the police officers with rape and is still investigating the case. Three other officers have been charged with assault and all four have been suspended.

Théo said in the television interview that he thought he was going to die during the incident. He said a police baton was forced into his anus and that he was then sprayed with teargas to the face and mouth and beaten to the head while officers shouted insults, including “bitch”. He said the pain from being sprayed and beaten to the head seemed “fleeting” because he was in such agony from the baton attack. “I was walking only because they were holding me up,” he said.

He was rushed to hospital for emergency surgery to repair his rectum. Doctors said he would be incapacitated for three months.

Police said things were quieter in the area where the incident occurred after Théo’s public appeal for calm, but on Wednesday 28 people were detained in neighbouring Parisian suburbs for “throwing objects, lighting fires and violence”.

Protests spread to northwestern France, with 20 people arrested in Nantes following a demonstration of around 400 people in support of Théo and incidents in the city of Rennes as well.

Sebastian Roché, a sociologist specialising in French policing, told Le Parisien newspaper that in recent years politicians had done little to address the decaying relationship between police and young people or to tackle the tensions and racial discrimination on housing estates. He said: “The crucial question is how to treat citizens in an equal way? No government on the right or left has seized on this question.”

If France’s highest court deemed the French state guilty of the unjust practice of identity checks on ethnic minorities- there should be at least some consequence to be had for these officers, as the check that lead to Theo’s assault should have never happened. As suggested, news that the investigation into the matter has deemed all of Theo’s injuries to be “accidental” may spark more protests rather than quell the anger of the community, and rightly so. In the video that circulated, it was apparent that this young man was unjustly profiled then dealt with using excessive force by officers who ganged up on him. All the injuries he sustained were for simply existing and being Black in a poor neighborhood. Not one of the officers intervened to do the right thing, and instead, as a group violated this young man in unimaginable ways. If France and other nations around the world want the trust of minorities, and the disenfranchised- the outward injustices these communities face at the hands of law enforcement needs to be addressed and officers of the law who violate this trust must be punished to the fullest extent. Until then, no justice, no peace- for France and around the World.

Watch the video below to see the community plead for justice for Theo, and make heartbreaking statements about what it is like to live in their neighborhoods controlled by violent police officers who as they say “think they can do as they can”.

[Video] Baltimore Cops Assault 16 yr Old Who Was Threatened With A Knife –...

Jeff Sessions Quietly Prepares To Double Down On Mass Incarcerations As Crime Rates Near...