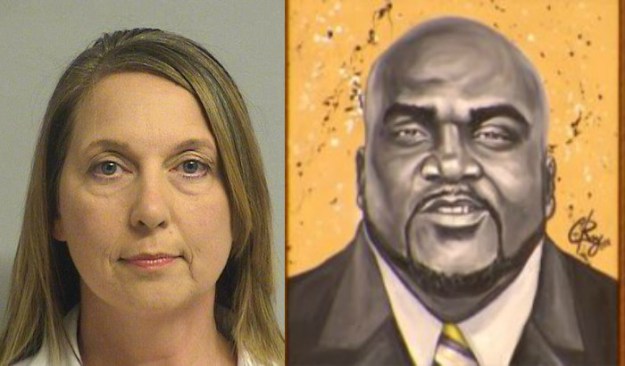 Last year, when we reported Crutcher’s killing, all evidence showed that he was killed unjustly by an overzealous officer claiming to have “feared for her life” when there was no imminent danger to be seen. Crutcher had his SUV stall on the side of the road, and while waiting for help, he was approached by police officers responding to a 911 call made by an onlooker about his vehicle being stuck in the middle of the road. Instead of being met with a helping hand, Crutcher was instead tased by officers, then shot fatally by Shelby. What also incensed people, was that Crutcher, lay dying in the street without any medical attention by attending officers.

“A statement was sent by the group saying:

“First and foremost: Mr. Crutcher’s death is a very sad tragedy. Our hearts truly go out to his family members as they mourn the loss of his life, and we pray that his soul is in Heaven.”

As reported on The Grio:

Tulsa police officer Betty Jo Shelby was arraigned Wednesday in district court. She has pleaded not guilty to first-degree manslaughter in the Sept. 16 death of Terence Crutcher.

District Judge Doug Drummond also overruled motions by Shelby’s attorneys to have the case thrown out for lack of evidence or sent back for a new preliminary hearing.

Prosecutors say Shelby acted unreasonably because Crutcher wasn’t armed or combative when she approached him after his SUV broke down, and that he obeyed commands to raise his hands.

Shelby’s attorneys say she shot Crutcher because she feared for her life, believing Crutcher was reaching into his vehicle for a gun.

Crutcher’s death last fall came after a long string of high-profile deaths of unarmed black men at the hands of law enforcement in 2016. Crutcher and the men before him were “proof that existing while Black can get you killed- you need not do anything wrong, let alone anything that justifies deadly force.” While many of these men’s deaths received no justice, there is still hope in Crutcher’s case. But if Shelby does is not convicted, not only will justice not be served, and it will perpetuate the notion that killer cops can use excessive and deadly force with impunity.

Watch the video below to see the harrowing video leading up to the moments of Crutcher’s untimely death. Do you think the evidence shows Shelby’s guilt? Let us know what you think in the comments.

Thousands Of US Troops Leave For Kuwait To Fight In Syria And Iraq –...

How Did This Mother Get Arrested For Homeschooling Her Children? (Video) – Anti Media...