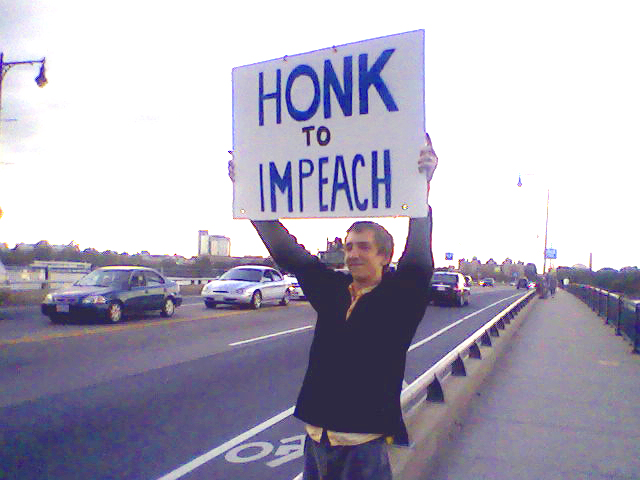 New York Rep. Jerrold Nadler has made use of an obscure legislative tool that would force a floor debate on President Donald Trump’s potentially unconstitutional conflicts of interest—a move widely seen as an initial step toward impeaching Trump.

Nadler, a Democrat, on Thursday “filed a ‘resolution of inquiry’ that amounts to the first legislative step toward impeachment,” wrote co-founder of RootsAction.org Norman Solomon in an op-ed for Common Dreams.

A resolution of inquiry is “a relatively obscure parliamentary tactic used to force presidents and executive-branch agencies to share records with Congress. Under House practice, such a resolution must be debated and acted upon in committee or else it can be discharged to the House floor for consideration,” explains the Washington Post.

The Post reports that it also asks for documents pertaining to “any investment made by a foreign power or agent thereof in Trump’s businesses; Trump’s plans to distance himself from his business empire; and any Trump-related examination of federal conflict of interest laws or the emoluments clause of the Constitution.”

Nadler explained to the Post that the resolution will force Republicans “to vote, in effect, on whether or not to abdicate their responsibility to have oversight.”

While there is already a grassroots movement to impeach Trump—and support for impeachment is soaring, as a petition to impeach that has already garnered 800,0000 signatures shows—Democratic members of Congress have appeared reluctant to address impeachment. Bold moves such as Nadler’s resolution of inquiry may force them to take action.

In fact, supporters of Nadler’s resolution are urged to call their representatives to demand they vote in favor it.

“Nadler has just put a big toe in the impeachment water,” as Solomon writes. “Yet no members of the House have taken the plunge to introduce an actual resolution for impeachment. They will have to be pushed.”

School Cop Who Received Oral Sex From A Child Won’t Have To Register As...