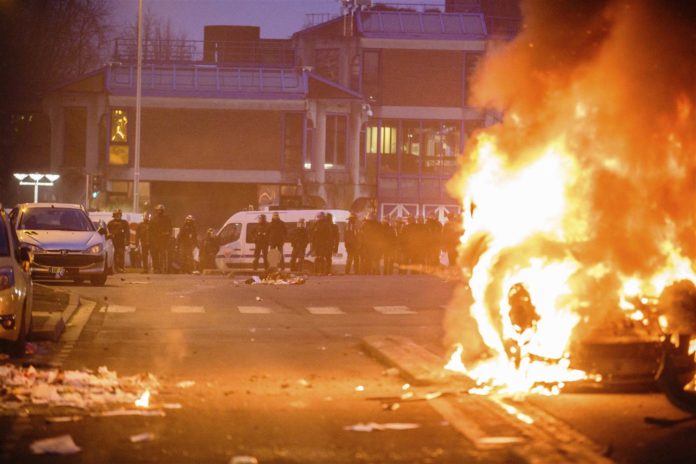 Protesters showed their disapproval of a man being anally raped by police, who then said it was “accidental.”

Authorities responded with tear gas after small groups threw projectiles amid unrest in Bobigny, a district in the northeastern suburbs of Paris that is home to a large immigrant community reported NBC.

“Several vehicles, including a media truck, were set on fire and police officers had to intervene to rescue a young child trapped in a burning vehicle,” a statement from the Paris police prefecture said.

4 Police officers are under investigation for anally raping a 22-year-old man — identified only by his first name, Theo — who was arrested Feb. 2. “The youth worker suffered such severe injuries to his rectum during an arrest last week in Aulnay-sous-Bois, north of Paris, that he needed major emergency surgery and remains in hospital.”

NBC reported on some details of the actions over the past week:

Theo’s case has prompted a week of demonstrations in the impoverished district. Cars and refuse bins were torched in a night of violence on Feb. 7 and disturbances resumed on Saturday, and again in the early hours of Sunday.

In a bid to ease tensions, French President Francois Hollande visited Theo at his hospital bed on Thursday.

Anger over the incident shows no sign of abating, after police investigating the incident reportedly announced Thursday that they believed the alleged rape was unintentional.

Unverified video of the arrest was posted on social media, but it could not be verified by NBC News.

A police source told news channel France 24 that it showed a policeman “applying a truncheon blow horizontally across the buttocks with a truncheon” and Theo’s clothes “slipped down on their own.”

However, a Bobigny resident identified only as Kahina, told Reuters at the scene of the demonstration: “It’s unacceptable that the police [inquiry] say it was an accident.”

She added: “It’s just simply abnormal and so I think these clashes are nothing compared to what people should do.”

As well as damaging cars, protesters also destroyed store fronts and produce. This is my life here, everything is lost.” said Mezine, the owner of a looted supermarket. “They broke everything, they all ran away. The shop is 200,000 euros, at least. Everything, my whole investment is gone.”

The area is one of the Paris districts that saw large-scale rioting erupt in 2005 when two local youths were electrocuted after they hid inside a power station while attempting to evade arrest.

In addition to the recent unrest in Paris, four people were arrested in the Mediterranean port city of Marseilles on the sidelines of a march in support for Theo, a police source told Reuters.

Nestle Stealing Water From San Bernadino National Forest Then Charging You For It –...